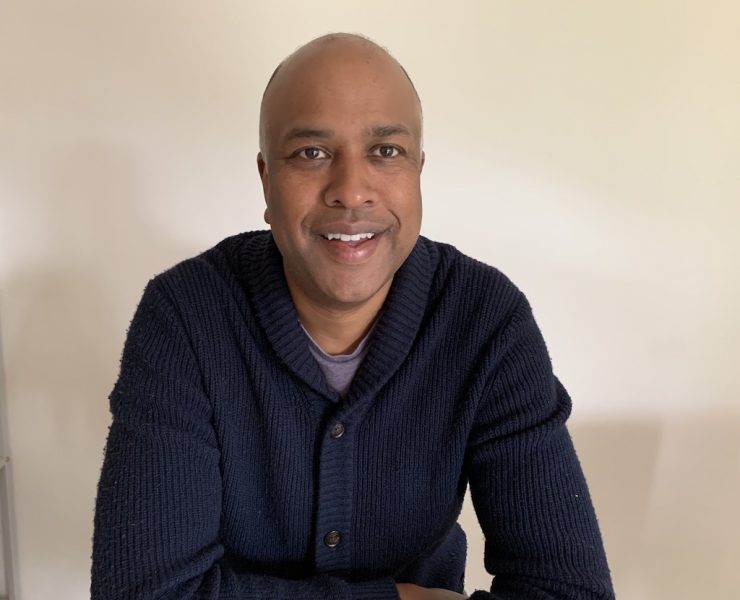 For Patrick Gilbert, ordination as deacon on September 25th, 2020, will be another step in an incredible  journey that began years ago when he cried out to God to show him that He was real.

Patrick has a story that movies are made from. Growing up in St Austell as the adopted mixed-heritage son of white parents, life wasn’t always easy. Despite a happy and very loving home-life, the wider community in Cornwall was less loving. Finding his place in the world was hard until Patrick let God take the reins. From that moment his life changed from a lonely young man in a grotty flat in Brighton to finding his birth mother on a sunny day and a seismic collision of circumstances in a school in Pondicherry, India.

Unbeknown to Patrick, his mother was a Christian and had been praying for him for years to find God, and for his forgiveness in giving him away as an infant. Her prayers were answered in full. Patrick went on to study music in New York and became involved in leading worship in mega churches before returning to Cornwall with his wife, Angela, and three children.

So, why, after such an enormously varied and exciting journey, would Patrick choose to be ordained in the Church of England? “I grew up in the Church of England, so in some ways it’s in my psyche. It feels nostalgic and it’s where I feel comfortable. I love the breadth of it, and its openness to different expressions of worship and I longed for that when I was in the States. Many of the churches I was involved with had small parameters, with limited wriggle room for expression. I loved many things about being there, but I always thought one day it would be great to come back.”

Patrick was in the States for ten years. “A lot of formation happened there, different experiences, different churches. Coming back to Cornwall, and ordination, much to my surprise, I’m hoping to draw on some of the things I learnt and somehow use them in this very different context. I’ve always held onto the promise the church made to exploring Fresh Expressions back in 2000, so I thought I’d hold them to it!”

“I’ve always held onto the promise the church made to exploring Fresh Expressions back in 2000, so I thought I’d hold them to it!”

When asked why it ordination was a surprise, Patrick laughs and says because he never saw himself as the sort of person who would become a priest in the Church of England. “But I felt that call, went through the discernment process and it just felt right.”

Patrick has spent the last year at New Street, Falmouth, the first Transforming Mission (TM) church in Cornwall. Patrick was training with St Mellitus South West. “It was a great experience, a steep learning curve and really interesting to see how the church faced its challenges.” Some of the challenges this very young church faced was bringing together a cohesive team. “Managing relationships, personalities, creating a team ethos that also allows people to be themselves – that’s a lot to hold. It was great to see how well that was managed.”

“Managing relationships, personalities, creating a team ethos that also allows people to be themselves – that’s a lot to hold. It was great to see how well that was managed.”

“We live in a world that is centred around self, what we want, what our desires are. In a church, that cannot really come into play. You have to think about what’s best for the church, the community. I’ve seen it in a lot of churches, as, ultimately, every church is made up of individuals and encouraging an attitude of collaboration and team playing can be hard.”

All Saints Highertown, an inclusive church that isn’t afraid to speak out about social justice

So, how does Patrick feel about working at All Saints, Highertown? It’s a church that is undergoing a huge transformation. It’s not only another TM resource church but is working hard to raise almost £3million to transform its church building into a purpose-built community centre. It has a very strong social justice ministry and is currently one of the largest providers of community services in Truro.

“I am so happy to be there. Truro has always been a special place for me, it’s where I used to go out, when growing up in St Austell. I really value the heart of All Saints, its social justice agenda. It’s also a good platform as a BAME champion for the diocese. It’s a very inclusive church that isn’t afraid to speak out.”

And neither is Patrick. You can hear his recent conversations from the Engine House with Lydia Robb and Kayode Odetayo from Truro Diocese around race on YouTube here. His experiences as a child of colour growing up in Cornwall are hard to hear, yet he really believes that God was with him and, astonishingly, thanks Him. “I wouldn’t be where I am today if that hadn’t happened.”

Patrick says he has mixed feelings about being the voice of BAME issues around the diocese and being on a steering group for Cornwall County Council. “It’s a great opportunity, but obviously it’s very real for me. Certain trigger points are a stark reminder of what I went through as a child, but if speaking out stops another child from experiencing the same, then that makes it all worth it.

“It’s a great opportunity, but obviously it’s very real for me. Certain trigger points are a stark reminder of what I went through as a child, but if speaking out stops another child from experiencing the same, then that makes it all worth it.”

“The very fact that I am to be ordained in the Church of England in Cornwall speaks for itself – there aren’t too many clergy who look like me!”