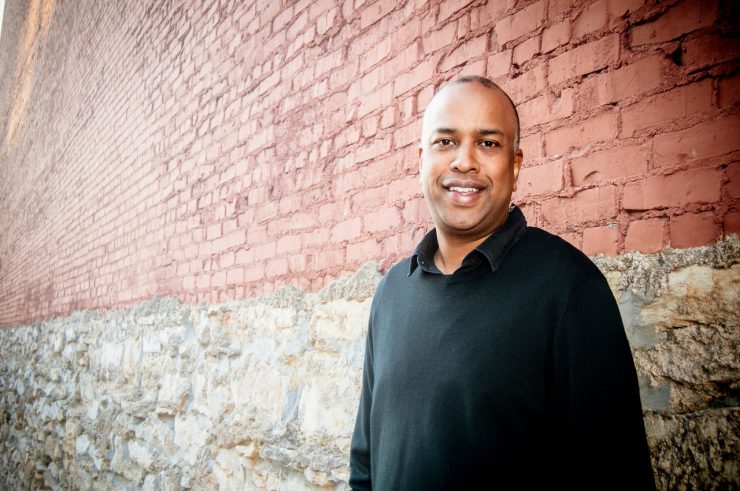 People often talk about the power of prayer, from the mundane, like finding a parking spot, to the magnificent. Patrick Gilbert’s story definitely falls on the side of magnificent. It reads like a film-script and what lies at its heart are two people, oceans apart, who prayed for a miracle.

Patrick was adopted when just a week old. His father was African, his mother Indian and he was brought up in a white family, mostly in St Austell. “Being so different from everyone, in the 1980s, in Cornwall was tough!” says Patrick. It’s hard to imagine just how tough. Patrick was one of less than a handful of non-white teenagers in a secondary school of 1200 pupils. And this was a time when the nation wasn’t known for its cultural generosity.

“Being so different from everyone, in the 1980s, in Cornwall was tough!” says Patrick.

But Patrick feels fortunate to have had a loving family and a few good friends to help him through the worst of it. He was also gifted, musically, and his family did everything they could to encourage him. “I started on drums, moved to keyboards, got into piano then discovered jazz. I loved its freedom, independence and improvisation.”

The inevitability of the why’s and wherefores

Inevitably, Patrick had questions about the circumstances of his adoption. He knew his mother’s name, that she came from Pondicherry, India, and very little else. With curiosity came introspection, self-doubt and frustration. Moving away to London when eighteen was a euphoric time of release – Patrick no longer felt different. He could pursue his music and, for a while, life was pretty good. But the questions around the whys and wherefores of being given away at birth grew darker and took their toll after a move to Brighton.

“I was in a very bad place, mentally and physically. I felt I was approaching the bottom of a downward cycle of depression and couldn’t find a way to climb out,” says Patrick. Brought up in a Christian family, it had been a good few years since he had connected with his faith. “But I did the only thing I could. I fell to my knees and prayed.” He sent God a challenge, “If you’re real, send me a miracle!”

“But I did the only thing I could. I fell to my knees and prayed.” He sent God a challenge, “If you’re real, send me a miracle!”

“Almost immediately, I felt lighter. Freer. In the days that followed, random people popped-up and offered me things – a new, light-filled place to stay and the possibility of a position as a musician on a cruise!” Patrick applied, was accepted and toured the Mediterranean for a few weeks. They liked him and offered him a place on the next cruise. It was going to India.

What happens when you pray for a miracle

“I couldn’t believe it!” says Patrick. “I was not only on my way to the country of my birth mother but, when I checked the itinerary, I saw that we were stopping over in Madras and Pondicherry!” Patrick told his story to his crew-mates and was asked to share it with the passengers. The whole ship began buzzing with his story until it was announced that an imminent cyclone meant they wouldn’t be able to pull into port at Pondicherry.

It was devastating – to have come so close to have to sail on by. But Patrick was called to see the cruise director who had heard his story and wanted to help; he arranged for buses to take passengers on a day trip from Madras to Pondicherry.

Patrick takes up the story. “Five bus-loads set off very early, arriving in Pondicherry mid-morning. It was a city of over a million people, I had only a few hours and little hope of finding out anything meaningful about my mother.

A rickshaw, a handful of hours and a population of a million

“The only thing to do was hop on a rickshaw with a friend and start touring. We went past a school and I remembered that someone once said a school was a good place to search as they keep records. So, we went in.

“I asked if they knew of anyone with my mother’s name and the receptionist said that, in fact, she was a teacher there. She showed me a photograph and I saw my own face. It was surreal. I knew for sure that I was in the middle of a miracle with no idea how it was going to play out.

I knew for sure that I was in the middle of a miracle with no idea how it was going to play out.

“I walked across the yard to where her classroom was. Apart from the thumping in my chest, the atmosphere was very serene. It was warm, trees swayed gently and sunlight rippled through the leaves. It was very beautiful. I found the classroom, but there was a lesson going on. I waited. The children came out and I walked in.

And there she was…

“And there was my mother. For the first time in my life I was seeing my mother. She invited me in and asked me to sit down. I put my head in my hands; I was so nervous I couldn’t look at her.

“She asked me what I was doing there, and I told her my name, that I was from England, was half African, half Indian and about my journey to Pondicherry.  When she asked why I’d come to see her, I said, ‘Because I think I am your son.’

“She’d always prayed for me since becoming a Christian fifteen years earlier. She’d prayed for forgiveness and that I would come to know Jesus.”

“She wept and said it was true. She said how sorry she was that she had to give me away as a baby, but that she’d always prayed for me since becoming a Christian fifteen years earlier. She’d prayed for forgiveness and that I would come to know Jesus. She asked if I forgave her and I said, ‘Of course, you are my mother.’ She ran to me and we hugged each other tightly, letting the tears flow. It was incredible.”

A perfect day for a miracle

Patrick says that when he heard his mother had been praying for him, he had a real wow moment, “That was as real as it gets. I was taken from one side of the world to find my mother on that perfect day when everything aligned.”

“That was as real as it gets. I was taken from one side of the world to find my mother on that perfect day when everything aligned.”

The alignment was more than extraordinary. There are about 60-70 schools in Pondicherry and Patrick picks that one. If the cyclone hadn’t happened, Patrick would have been there a day earlier, when his mother wouldn’t have been working. God can not only move mountains, He can create cyclones and change the course of a ship so a son can meet his mother.

Patrick’s story doesn’t end there. Not surprisingly, school hadn’t furnished him with a stellar set of qualifications, but he knew his music. With his birth mother’s help, he travelled to New York where he won a scholarship to the study jazz at the prestigious New School. He became part of the worship team at the mega Times Square Church, met and married his wife and was sent on a year’s mission to…Pondicherry! “It was a wonderful year with time to get to know my birth mother.”

From one adventure to another

Three children later and a detour via Ireland, Patrick has returned to Cornwall with his young family and is currently training to become ordained. Based in Falmouth, Patrick stands at the foot of his next adventure. “The call to ordination was very clear and the process is very exciting, although the travelling is quite onerous,” says a man who has been pulled across the oceans to a classroom in southern India to find his mother.

They knew I believed that it was God, answering my desperate prayer and my mother’s repeated prayer of fifteen years by delivering a miracle. A truly amazing, mind-blowing miracle

And what of the people on the ship when Patrick returned on that amazing day? They were all hanging over the rails, whooping and cheering, and the captain was waiting with an enormous bottle of champagne. “I often think of them. There were hundreds of people on that ship and they all heard my story. They knew I believed that it was God, answering my desperate prayer and my mother’s repeated prayer of fifteen years by delivering a miracle. A truly amazing, mind-blowing miracle.”

Patrick’s story embodies the power of prayer, but it also shines with hope, forgiveness and perseverance. And it’s so much more than a great idea for a film-script. It’s a true story.

Patrick’s story embodies the power of prayer, but it also shines with hope, forgiveness and perseverance. And it’s so much more than a great idea for a film-script. It’s a true story.

The Trelawny Way with scarecrows, tractors and horses