The Trelawny Way with scarecrows, tractors and horses 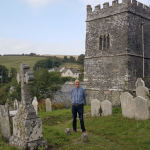 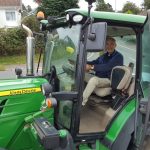 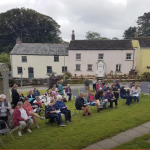 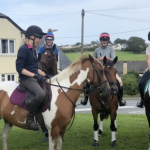 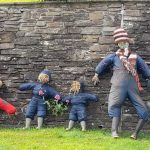 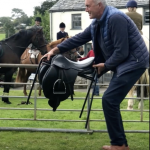 Scarecrows, tractors, horses and most probably guys at Guy Fawkes are Revd Richard Allen’s current stock in trade when it comes to church services. When Revd Richard of the Trelawny Benefice says he thinks outside of the box, he isn’t kidding!

It’s hard not to get caught up in Richard’s infectious energy and enthusiasm for his newly appointed role of Rector of the Benefice of Trelawny, Cornwall. Ordained over 30 years ago, Richard shows no signs of running out steam, or ideas. That’s probably partly because he took a break from parishes to become a PE teacher and chaplain at Millfield School in Somerset. This not only indulged his passion for rugby and cricket but also evangelism. Richard has a huge heart for people who don’t yet know how much they are loved by God.

“The sporting world is tough. Being a chaplain, especially one almost as excited about sport as the sportsmen and women in my care, gave me unique access. Many sports people miss out on opportunities to hear about how relevant Jesus is, simply because of timetables and fixtures on Sundays. Chaplaincy in a school like Millfield meant I was pretty much on duty 7 days a week, for 3 terms of 10 weeks, every year for 15 years. Ultimately exhausting, but full of opportunities to minister to my young charges – and older staff members.”

Long before his Millfield days, Richard became Christian in, then curate and rector of, Christ Church Exmouth. There possibly aren’t too many others who can make similar claims. But on meeting Richard, even over Zoom, it somehow isn’t surprising. Richard is a force of nature, determined to reach those who wouldn’t ordinarily come to church and, although trying, isn’t terribly good at being patient.

Perhaps that’s a response to the current landscape in Cornish churches. It’s no secret that many churches face uncertain futures. When Richard took up the reins of a benefice populated by small churches with even smaller congregations earlier this year, he knew he was at a crossroads. Settle into gentle retirement, in one of the most beautiful areas of Cornwall? Or respond to that spring he was feeling in his step and find out what revival could look like.

“The churches are filled with loving, faithful elderly parishioners. But if the churches are to survive, we need to also fill them with hope and eager expectation.”

Happily, he reached for the latter. “The churches are filled with loving, faithful elderly parishioners. But if the churches are to survive, we need to also fill them with hope and eager expectation.”

God can reveal Himself anywhere – even on horseback

All of which is great, but how do tractors, horses, and the rest of it come into play? “By going out there, where people are – to the farms, stables, liveries and schools. Thinking creatively, injecting services with fun. Showing people who wouldn’t normally have any interest in churches that God can reveal Himself anywhere. Not just in the liturgical pages of a church service, as beautiful as those words might be.”

Showing people who wouldn’t normally have any interest in churches that God can reveal Himself anywhere, not just in the liturgical pages of a church service, as beautiful as those words might be.”

Finding opportunities for mission even through a pandemic with tractors…

In a bizarre way the pandemic has helped. With little appetite for meeting in small churches, Richard has run outdoor services from early May to late September. These have been on village greens, on the quayside or in large barns. One of first of these being a blessing of tractors of all sizes. None of them quite as large as TV’s Jeremy Clarkson’s Lamborghini tractor but Richard is hoping to make up for that with a combine harvester in the next service. “It was fabulous, young farmers came and afterwards children and families were invited to clamber over them, sit in the cabins with the farmers explaining all about their work. I preached on the feeding of the 5000 and we gave thanks for our agricultural bounty in Cornwall and prayed for those in countries whose crops are not faring so well.”

The blessing of scarecrows gave the parishes chance to have some fun, work together to produce the scarecrows and then enjoy an outdoor service that acknowledged predators but gave thanks for our gardens and crops. There was even a scarecrow that looked very much like a vicar…

An equestrian service welcomed people on horseback, including young teenagers, celebrating their horses and the joy they bring. The service was graced by Pippa, the Trelawny Benefice Administrator, riding side saddle. 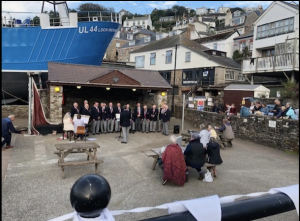 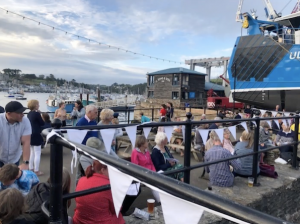 A Harvest of the Sea service met at the quay in Polruan and was led by the Pelynt Male Voice Choir. ‘It was wonderful, we included some hymns like Will Your Anchor Hold and I preached about the Lifejacket that Jesus offers all of us.”

And there’s more. Pet services with dogs, cats, guinea pigs and hamsters and a planned festival of light around November 5th when people can bring and burn their guys. All of this is great fun but where will it lead and how can it be sustained?

“I’m an evangelist. By which I mean I want people to know that Jesus loves them. People aren’t coming to our churches, so they aren’t hearing that. They don’t know what it is to have a relationship with a God who loves them beyond measure – and people need to know that. To feel that unconditional love, especially now when so many are struggling.

“I feel called to be a shepherd, to go after the ones that don’t feel included. And that means going, as Jesus did, to the spaces and places that people are – farms, liveries and the coast.”

“I feel called to be a shepherd, to go after the ones that don’t feel included. And that means going, as Jesus did, to the spaces and places that people are. For this area, it is the farms, liveries and coast. God called us here and it feels like we’ve been called home, and that will sustain us. Through all the crazy, sometimes chaotic ideas. With all the tremendous love and support my wife Harriet and myself have experienced since we arrived.”

Helping others to think outside of the church/box

Day to day, when not organising these outdoor events, Richard is developing a burgeoning ministry in Baptisms. “After I baptise children, I say I hope the families have enjoyed the service and maybe they feel challenged by what they’ve heard. Perhaps they have other children that they would like to be baptised. Every time, they approach me afterwards and another service is arranged – it’s evangelism, an opportunity to share the Gospel.”

His prayer is for support in the day-to-day ministry, to build up a team as he has no doubt the ministry will grow. He would also like to be able to run courses, to share his experiences and encourage others to be bold, think outside of the church/box. I’m pretty sure it won’t be too long before his prayers are answered.

To have a look at some of what the Rector of Trelawny has been up to, take a look at the film below.

Giving thanks for the tractor

Bishop Philip shares his vision of the Church in Cornwall

Diocese of Truro @DioTruro
Looking for something a little different this Sunday? Join in @TrelawnyBenefice's Lambing Service and meet newborn… twitter.com/i/web/status/1…
18 Jan
ReplyRetweetFavourite