A story about Percy, God’s dog

I have spent a lot of my working life writing other people’s stories, so I thought it was time to share one of my own. This is a story about our beautiful Golden Retriever called Percy and how we believed him to be God’s dog. Percy came to us for our first Christmas in Cornwall and left us on Good Friday, 13 years later.

When, as a family with our four young children, we moved from London to Cornwall we hoped we were entering a new and exciting stage of our lives, where the sun would always shine, everyone would be kind and life would be gentle. Fulfilling a long-held promise to buy a dog for the children topped off the dream.

Except the dream quickly became a nightmare. It was 2007, the year the economy crashed, and we were not spared. Our life in Cornwall was the Facebook envy of our old friends, who can’t spin a good story on social media? But the truth was we had a lot of debt, a lot of stress and even more fear. My husband and I stopped taking deep breaths as we fought to hold everything together.

But we had promised the children a dog and we had put a deposit on a beautiful puppy who we named Percy. We were due to pick him up on Christmas Day, giving multiple reassurances that he was absolutely a dog for life and not just for Christmas. But on the day before Christmas Eve, I had a call from my husband who was working away. He had been paid for some freelance work, the bank thanked us for bringing our account up to zero and then closed the door on our overdraft.

That meant we didn’t have enough money to pay the balance for Percy, or to buy a turkey. Percy was the children’s only Christmas present. We needed £500.

The stories we tell our friends

Sitting on the sofa, trying not to panic, the phone rang again. It was Kate, a new friend from our new life. Kate was a Christian, which was something we shared, but Kate was one of those super-Christians, on direct dial to God.

Kate: “How are you Jac? I’m a bit worried about you.”
Me: “Absolutely fine! Looking forward to Christmas. Had a bit of a wobble with the bank but all is being sorted out. How are you?” Etc…

I put the phone down. Cried a bit and went back to worrying about how on earth we were going to get out of this one. Twenty minutes later there was a knock at the door. It was Kate.

“God has told me you need this,” she said, handing me an envelope.
“What? No way!” I said, knowing this younger woman was trying to give me money. I had pride, and shame and need.
“God wants you to know that He loves you and that this is for you.”

And the stories God wants us to tell

More tears. Lots more tears. How could I, a woman approaching middle-age with four children, low on self-esteem but high on dignity, accept a monetary gift from a younger woman I really barely knew?

We talked some more and finally I agreed to take it, provided it was considered a loan and not a gift. Kate said it didn’t matter how I took it, so long as whenever I spoke about it in the future, I let people know that it was God who was giving us the gift.

Kate left and I opened the envelope. It was £500. Exactly what we needed to pay for Percy, the turkey and to give the children their first magical Christmas in this foreign Cornish land.

The gift Kate gave us was so much more than cash. It was the realisation that God was with us. That he cared very much about our needs, where we were and had taken an amazing step to meet us. And so began my faith revival.

Stories of how God meets us in the messiness of life 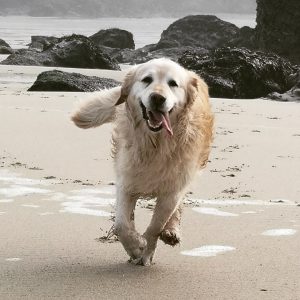 I had grown up a Christian, did the classic running away thing in my late teens, taking small steps back into the fold after the miracle of the children being born. But it was on that day before Christmas Eve, on the doorstep of the home we couldn’t afford, living a life we didn’t think we would be able to make work, that God met me and showed me how much love he had for me and my family.

Percy was a wonderful dog. He had the loudest bark and was an extraordinary protector of us, his family. We adored him. Sadly, Percy died a year ago. But fittingly for God’s dog, God called him home on Good Friday.

And stories with a footnote of hope

There is a footnote to the story. Five years later when an entirely unrelated incident looked set to derail our lives again, my husband, Jonathan, became a Christian. On the morning of his baptism in the sea at Loe beach I asked God to show me that his faith was genuine. That this wasn’t something he was doing for me. I looked at my Bible in One Year app, and scrolled down to the Old Testament bit, which I confess, shamefully, I rarely read as I found it boring. The prayer that Nicky Gumble wrote, following a passage about David’s faithful friend, said, “Dear God, may we all have a faith like Jonathan.”

I didn’t even know there was a Jonathan in the Bible. He got me again. 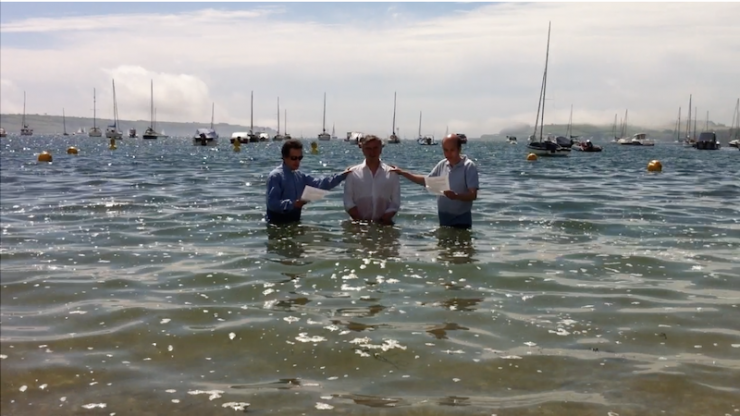 Prayer plea for replenishment of hope for Mzimvubu