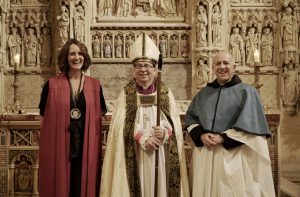 Diocesan director of education and discipleship, Revd Simon Cade, and the mission and ministry lead of Creation Fest, Sarah Yardley, have both been installed as honorary canons of Truro Cathedral.

Speaking after the service, Revd Canon Cade said: “It is an honour to be asked to serve as an honorary canon, thanks to the bishop for thinking of me and to the cathedral for the splendid welcome and service.

“The canons get a seat or stall to sit in, right behind the choir, and each seat is named for a saint, my saint is St Columb. This is the Cornish Columb, a martyr from the ancient Celtic Church. I think that right now that is my favourite thing about being a canon, that when the bishop chooses to honour me he does so with the name of this young woman from more than a thousand years ago.

“In modern terms Columb was an asylum seeker fleeing sexual exploitation, for a few hours or days she found freedom among us here in Cornwall before her persecutors caught up with her. A few miles inland from where she came ashore she died, but her story lives on today in place names and holy wells, and in a Canon of Truro.

“The men who murdered Columb are long forgotten, but in her the voice of refugees and asylum seekers is remembered. There is something wonderful and sad in this, an ancient legend, but an important and very modern story.

“Columb reminds me of how Christ calls us to serve the poor and desperate, to be generous and hospitable, and how He was himself an asylum seeker and refugee. There are few honours more profound than to be named alongside the most vulnerable and broken of Christ’s children.”

And Sarah Yardley, who was installed as a lay canon, said: “It is my continual joy to look to Jesus for the rules or canons of my life, so to be included as one of those who stands on behalf of the living Word and call people to walk in light of the rules of Christ is a great honour.

“I’m thankful for the friendship of the Diocese of Truro to myself and Creation Fest as we extend the invitation of freedom and life, which we believe is found in walking in relationship with Jesus Christ.

“May our partnership together continually extend a generous invitation for many to enter the Kingdom of God.”

The pair were installed at Truro Cathedral on Sunday, November 3.

A lone pilgrim on the Cornish Celtic Way

Diocese of Truro @DioTruro
Looking for a different path? We are looking for an Operations Manager. Find out more here: trurodiocese.org.uk/vacancies/oper…
13:34, Mon
ReplyRetweetFavourite