Downing Street has announced that HM The Queen has approved the nomination of the Revd Canon Philip Mounstephen as the 16th Bishop of Truro. 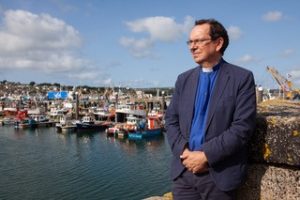 Revd Canon Philip Mounstephen has been announced as the 16th Bishop of Truro. Philip is pictured at Newlyn Harbour

Philip is currently the executive leader of Church Mission Society, a role he has occupied since 2012. Prior to that, Philip was chaplain of St Michael’s Church, Paris. He has also previously worked for the Church Pastoral Aid Society in a number of roles, serving as deputy general director from 2004 to 2007.

Philip, 59, was ordained as a deacon in the Church of England in 1988 and priested the following year, serving his curacy in Gerrards Cross and Fulmer in the Diocese of Oxford. From 1992 to 1998 he was the Vicar of St James’ Church, West Streatham, in the Diocese of Southwark.

Philip has significant family roots in Cornwall with several generations of his ancestors living in Tregony from the mid-18th century, before moving to Truro.

On his appointment, Philip said: “I am absolutely delighted to have been called to lead the Diocese of Truro in mission and ministry. With my family roots in Cornwall I am very well aware of what a rich Christian heritage we have. I rejoice in Cornwall’s strong sense of identity and I look forward under God into leading us in what I hope and pray will be a fruitful and exciting future.”

Philip has been warmly welcomed by the Bishop of St Germans, the Rt Revd Dr Chris Goldsmith, who has been acting Bishop of Truro since the departure of Bishop Tim Thornton. Bishop Chris said: “I am delighted to welcome Philip on behalf of the Diocese of Truro. He clearly brings a great deal of energy and expertise, both in terms of his experience of parish and chaplaincy ministry and as somebody who has been a successful leader of a large and complex mission agency.

“We are very much looking forward to working alongside Philip as he brings his gifts and knowledge to serve and lead the Anglican Church in Cornwall, the Isles of Scilly and our two parishes in Devon.

“I know that members of our congregations and people in the wider Cornish community are keen to meet Philip and together with him to discern God’s vision for the next steps on our journey as the Diocese of Truro.”

It is hoped that Philip will be consecrated as a bishop later this year and that a service in Truro Cathedral to welcome him as bishop will take place early in 2019.

Philip is married to Ruth, who is a strategic planner in the charity sector, and they have one grown-up, married daughter.

Date announced for service to welcome new Bishop of Truro

Lament for the Windrush generation and call to action