1 in 3 Day of Action: Join the 3-minute silence 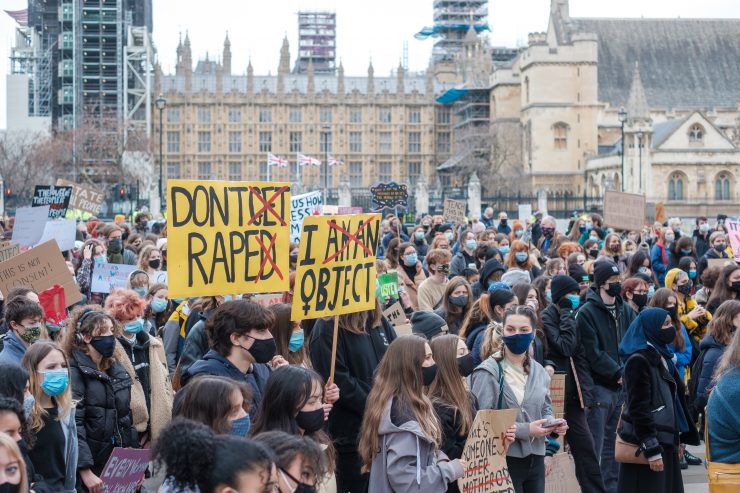 What comes to mind when you think of the Mothers’ Union?

Did you imagine a global network of 4 million people?

Did you think about a campaigning organisation committed to ending poverty and injustice?

Did you imagine that their key campaign is to end physical and sexual violence against women?

You are invited to join members of the Mother’s Union at Truro Cathedral on Saturday, November 27 to raise awareness of violence against women and girls.

A short service will take place in the cathedral before those present will take to the cathedral steps to hold a 3 minute silence as part of the Mother’s Union 1 in 3 Day of Action so named because 1 in 3 women globally have suffered domestic or sexual violence.

In recent months, the reason why the Mothers’ Union 1 in 3 campaign is needed has been made clear again. The murders of Sarah Everard and Sabina Nessa, statistics showing that violence against women rose across the world during the pandemic both in frequency and intensity and the horrible outbreak of ‘spiking’ in pubs and bars all made the front pages recently with one article highlighting that at least 81 women had been murdered by men since Sarah Everard’s death. Underneath those front page stories are millions of individual girls and women, each of them made in the image of God, suffering violence because of their gender.

The Mothers’ Union 1 in 3 campaign is so called because it is estimated that 1 in 3 girls and women will experience domestic abuse during their lifetime. This kind of abuse might involve physical or sexual violence either at home or in public, but it could also involve coercive and manipulative behaviour which limits the opportunities and choices available to a woman or girl.

It can affect any family or any woman, is not restricted to any section or part of society and is as present within church communities as elsewhere.

And the Mothers’ Union invites us all to take a stand and to do so in particular on Saturday, November 27. There will be a short informal service taking place at Truro Cathedral at 12.30pm that day before those present take to the cathedral steps to hold the three minute silence.

Diocesan Synod, which meets that day, will hold a three minute silence at 1:03 in witness to the suffering of so many women, and in commitment to ending this terrible evil. And you would be very welcome to take part as well.

But that’s just one day. Beyond that, what can we do?

The first step is for everyone to find out more and to educate ourselves about gender based violence and domestic abuse. There is very good information available through Restored, a Christian charity committed to ending violence against women in society and in the church. Their website is worth looking at and includes a very good resource pack for churches, something I would love to see many churches making use of.

The second is to engage men. The fact is that it is men who carry out this kind of violence and, writing as a man, it is on us to take responsibility. That means educating ourselves about what’s going on. It means listening carefully to the experience of women. It means speaking to our sons, grandsons, godsons and nephews and teaching them about the issues. It means being ready to speak up when we see sexism or any hint of aggression or abuse towards a woman.

Proud to wear a White Ribbon

And with that in mind, I have recently made the promise that the White Ribbon campaign invites all men to take – ‘to never commit, excuse or remain silent about male violence towards women’ and I am proud to wear a white ribbon as a public commitment to that promise. If you’re a man reading this, I encourage you to make the same promise. After all it’s us men who are the cause of this terrible problem, and it’s us men who need to become the solution.

Jesus once met a woman in a street. She was surrounded by men who wanted to do her terrible harm because, they said, she had committed adultery. There was no man under attack, just the woman. Jesus was invited to accuse her as well, but instead invited the men present to respond to a question. ‘Pick up a stone and throw it at her, but only if you have never sinned’. When he looked around a few moments later, none of the men were still there; they had all left.

Boldly and clearly, Jesus called out the men who intended to do violence to the woman. Led by the Mothers’ Union, their allies and all girls and women, may we learn from him and follow his example, so that the day will come when no girl or woman ever suffers violence or abuse because of their gender.

Restored: I need help is a Christian charity

Safer Futures is a service in Cornwall for women who are suffering domestic abuse or sexual violence; Call 0300 7774 777.

Give a gift locally this Christmas

Get involved in the Bats in Churches study