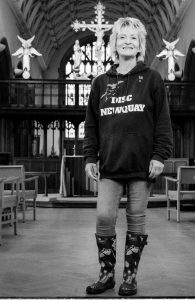 Monique Collins wept when she was told of being nominated for the Cross of St Piran, “It’s such an honour but it isn’t for me, this is given to all of the DISC team. Without them I couldn’t do a fraction of what goes on here.”

And what goes on in DISC is very impressive. It’s becoming a community hub in Newquay, operating out of Sandy Lodge, where anyone who is struggling is assured of a warm welcome, a boost to their self-esteem and some non-judgmental practical help. That could be anything from a hot cooked meal or bags of fresh food to a top up for the electricity or credit on a phone. It could be help with mental health, addiction or a housing issue. It might even be a haircut or the services of a podiatrist.

Galvanising local support for a community that is struggling

DISC is supported by a raft of local agencies and organisations, including the Cornwall Community Foundation, FareShare South West, the local and Towan Blystra Lions and the Rotary Club. Everyone who helps has been galvanised into action by Monique’s enthusiasm and passion to get the sort of help her local community needs. 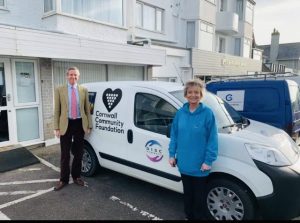 “That’s why I do it,” says Monique. “Our community is really, really struggling. I walk through the streets of Newquay and feel so sad. Everything is closed, shops, hotels, bars. It’s a town that depends on tourism and now there is none. Even when the pandemic is over it will take a very long time for people to recover, and a great many businesses won’t.”

“I walk through the streets of Newquay and feel so sad. Everything is closed, shops, hotels, bars… Even when the pandemic is over it will take a very long time for people to recover, and a great many businesses won’t.”

Monique has an instinct for seeing people, knowing what has to be done and doing it at DISC

One of Monique’s hopes for the future is to help locals back into work. “We can’t create employment, but we can make it easier for people to work by better equipping them with confidence, encouragement and the kit they need – work boots maybe, or a smart black trousers and a shirt.”

With a background in social work, Monique really sees people. It’s their stories that keep her going. “One young couple with a three-year old lost their rental accommodation during lockdown as the owner wanted to sell it. They ended up in a caravan park with only a gas heater to keep them warm. The father is a musician so there is no work. So, we helped by giving them gas bottles.”

Another couple got into difficulty when the husband lost his well-paid job. “There’s a perception that the sort of help we offer is just for people on benefits, or Universal Credit. That isn’t true. Hard times can fall on all of us. There is too much shame around asking for help and too much judgement for those who have the courage to ask.”

“Hard times can fall on all of us. There is too much shame around asking for help and too much judgement for those who have the courage to ask.”

Monique has an instinct for knowing what needs to be done and rarely stops until she has it sorted. Since she took over the management of DISC in 2018, they have been in three different premises, a logistical challenge that would have floored most people. But Monique picks up the phone, makes connections and makes things happen. “People want to be kind and want to help. I’m just giving them the opportunity.”

The output from DISC is as staggering as it is inspiring

The output from DISC is staggering. Last year they had roughly 1,000 different beneficiaries including children and gave out 100,000 food portions from just DISC, not including other sources that are helping as well. The numbers doubled from September to November, doubled again to January and look as if they are doing the same in February. They are at ten times the capacity they were a year ago. Currently, they are sending out 4000 portions of hot food each Monday and 3500 each Friday. They also make up bags of food for breakfasts and lunches for around 55 families. Although a lot of food is donated, they spend around £2000 per week on salads, meat and the containers they distribute the food in.

Why bother? The task seems so enormous

When asked why she does it, why bother, the task seems so big, Monique says, “I do it because I want to help people, because of my family, my team and my faith in God. I still have faith even though I’m a lapsed Catholic. Growing up in the Netherlands I was one of the liberal Catholics the Pope didn’t like!”

“I was one of the liberal Catholics the Pope didn’t like!”

There’s no doubt the Pope would feel differently now. Monique’s warmth and love of community is infectious. Rooted in practicality, she knows how to bring people together to share in the care and offer meaningful help. Ultimately, her aim is to give people the tools to feel empowered, “I want people to feel good about themselves, to believe in themselves that whatever the problem currently is, it can get better.”

“I want people to feel good about themselves, to believe in themselves that whatever the problem currently is, it can get better.”

That’s true of the team that she is so proud of. Many of them came originally for help and ended up helping others. “I love them, I am a very small cog in a brilliant machine and this award is for them.”

“I love them, I am a very small cog in a brilliant machine and this award is for them.”

Opening doors, hearts and kitchens to the homeless

Inclusion – isn’t that what Jesus did so well?

Walking the Day of Prayer in Newquay