Celebrating the calling to become a Reader 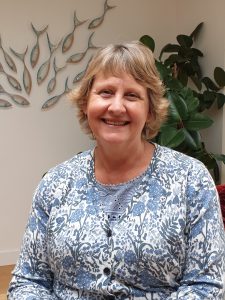 The annual Reader service takes place at Truro Cathedral on Saturday, October 12 and among those being licensed will be Debbie Harris from St Ives.

It’s been quite a big year for Debbie who began her Christian life in the Roman Catholic Church. Although she’d come to love the Anglican church, she hadn’t made an official commitment and thought, during her Reader training, that now was as good a time as any to become an Anglican! Bishop Philip was delighted to receive her during an intimate ceremony with her fellow Readers just six months ago.

Debbie considers her early experiences of the Roman Catholic Church a blessing as she has been able to appreciate a range of worship and experiences across different denominations. She also credits her love of sacramental worship to her time at convent school. “I think it was really formational. I had a very good relationship with the nuns and feel that’s where I really learned a love of sacramental worship and a love of the Holy Spirit.”

I had a very good relationship with the nuns and feel that’s where I really learned a love of sacramental worship and a love of the Holy Spirit.

The journey to Cornwall and the call to serve

Having met her husband Andy at university, the couple began looking for somewhere they could worship together. “I was very fortunate to meet someone who had a very strong faith as well. Once married we looked for somewhere we could worship together and we ended up in an evangelical Anglican church where we both remained very involved for 25 years.”

Following Andy’s retirement from the police force, they made the move to Cornwall from Berkshire. “We’d been coming to Cornwall for 20 years and always said we’d move this way one day.”

They found their home at St John’s in the Fields in St Ives and now, five years later,  and three years after starting Reader training, Debbie preaches monthly as part of a Eucharistic service. “Once we’d moved I began thinking, ‘Now what do I do?’ I felt called to serve and it was just a question of how I was going to do that here. So I prayed about it and felt Reader Ministry was the right direction to go in.”

“I felt called to serve… so I prayed about it and felt Reader Ministry was the right direction to go in.”

Volunteering with the Salvation Army and working with young people

Debbie, who used to be a teacher, also volunteers with the Salvation Army in St Ives at their Friday night youth project. “I used to work with year 12 and 13 students and worked as a youth worker in the Church of England. It was spending time with the Bible and young people, planning services and preaching that I missed.”

Once licensed, Debbie will continue her work with children and young people. As well as the Salvation Army youth project, Debbie has also helped set up babies and toddler groups at St John’s.

As part of her Reader Ministry, Debbie has also just started to work in chaplaincy at Penwith College.

“During  my Reader training I did my third year placement at Truro College working with Revd Elly Sheard, the chaplain there. I felt very comfortable in that environment but as chaplain you are there for the staff as much as the students and it is a listening role more than anything else.”

“I felt very comfortable in that environment but as chaplain you are there for the staff as much as the students and it is a listening role more than anything else.”

What it means to be a Reader

“There are always a lot of important people and moments in your journey, signposts along the way. If you are even considering Reader Ministry, it is because there has been something that has tweaked you.

When Debbie steps up at the cathedral for her licensing on October 12, she will be supported by her husband Andy, family and friends from Berkshire and St John’s.

While the Rt Revd Philip Mounstephen will be officiating at the service, Readers play a large role. The attending minister will be Wendy Smith from the Parish of St Crewenna. The reading will be by Claire Salzmann from the Camel-Allen Benefice and the preacher will be Jim Seth from the benefice of Redruth with Lanner and Treleigh. Marcus Jones from the North Cornwall Cluster of Churches will lead the intercessions.

Those from other dioceses to be welcomed:

Permission to Officiate for the first time:

The egg that shares the Easter story launched

Give a gift this Christmas and support local charities