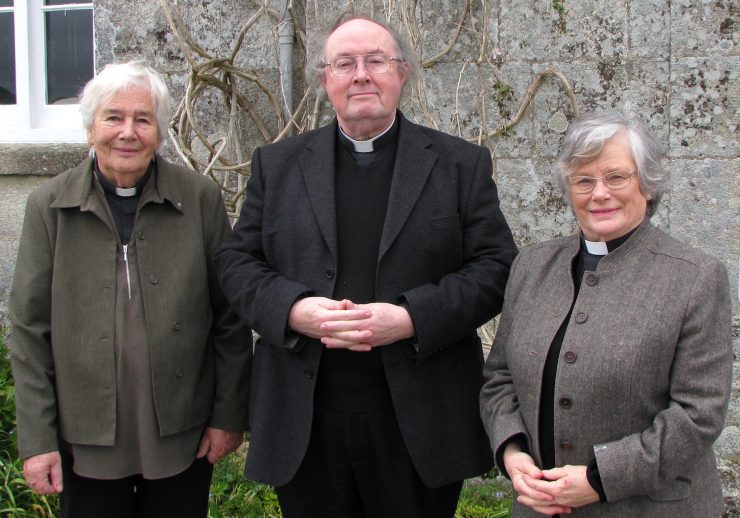 We are delighted to share this from guest writer David Watson

To be an authority on a particular subject is a wonderful gift; to be able to share that knowledge in an erudite and digestible fashion is another. Revd Professor Andrew Lewis, Prebendary of Marnays in the Collegiate Church of St Endellion, exhibited both skills much to the delight of members of the Truro Branch of The Prayer Book Society at its AGM on Sunday 28 April, when he spoke on ‘The Primer of 1553’.

He began by saying he suspected that, although his audience was well acquainted with 1662 version of the Prayer Book, it was probably not the case with the 1553 Primer. He explained how in the mediaeval church there were not many liturgical books. There were Books of Hours for personal prayer, and some Breviaries and Missals – but in none of them were there helpful rubrics.

Professor Lewis drew his audience’s attention to the following wording from the introductory ‘Concerning the Service of the Church’ from 1662 Book of Common Prayer:

‘Moreover, the number and hardness of the Rules called the Pie, and the manifold changings of the Service, was the cause, that to turn the Book only was so hard and intricate a matter, that many times there was more business to find out what should be read, than to read it when it was found out.’

How the Primer helped congregations

So, as a consequence, there was an incentive to better assist congregations at worship and guide individuals in their private devotion – and Primers fulfilled this purpose. The advent of printing gave new impetus to the production of these texts and Books of Hours became highly personalised.

The 1553 Primer can be seen as an intermediary document in making worship more accessible to the public. It contained some text in Latin and some in English, including the Lord’s Prayer. The liturgy largely followed the pattern of the Sarum Order. Psalms were reduced to a minimum and it provided a different set of readings and a different Litany.

Falling into disuse during the reign of Queen Mary

Although Edward VI’s Primer (1553) borrows much of its content from the 1552 Book of Common Prayer, it still retains aspects of the mediaeval liturgical tradition. Following Edward’s death in July 1553, it fell into disuse throughout the reign of Queen Mary; although the publisher did try to tweak it to give it wider appeal. Later Latinised versions of the Edwardian Primer were produced and their appearance is a hallmark of the degree of religious instability that prevailed at the time.

Professor Lewis went through the contents of the 1553 Primer and explained that it is useful to compare them with those of the Book of Common Prayer (1552); especially its commencement with a Kalendar, The Catechism, Graces before Dinner and Supper and a chapter entitled ‘Before thou pray’. In this latter section, appears a general prayer into which has been inserted an exhortation to pray specifically for one Thomas Cottesford, a Protestant of whom little is known other than he was probably subcontracted into assisting with the compilation of the liturgy of the 1553 Primer.

No attempt is made in the 1553 Primer to go through the entire Psalter. But rather, psalms are selected and grouped together to shoehorn the mediaeval tradition into the Primer format.

What the 1533 Primer had to say about Bishops, Landlords and Lawyers

Professor Lewis quoted passages from the ‘Sundry Godley Prayers for Divers Purposes’, which appear at the end of the 1553 Primer. This series of revealing intercessions, speaks in extremely unflattering terms about certain groups of people, such as Bishops, Landlords and Lawyers; whilst praising gentle men and offering salutary advice as to the appropriate behaviour of maids.

Concluding – and with his tongue firmly in his cheek – Professor Lewis suggested that many of these prayers might provide highly pertinent material for intercessory prayer in today’s world!

Prior to this presentation, assembled members of the Truro Branch had held their AGM and welcomed their new Chairman, Revd Hilary Spong; who, in turn thanked the retiring Chairman, Revd Canon Pat Robson, warmly for her “enthusiastic and positive leadership” spanning eight very busy years which had seen the Truro Branch of the PBS “go from strength to strength”.

If you would like to become a member of the Truro Diocese Prayer Book Society, please contact either Hon Sec, John St Brioc Hooper at j.stbrioc@btinternet.com or Revd Hilary Spong at hilaryspong@sent.com. Corporate membership is also available for Cornish churches that use the Book of Common Prayer for services on a regular basis.

Generous Giving even in a pandemic