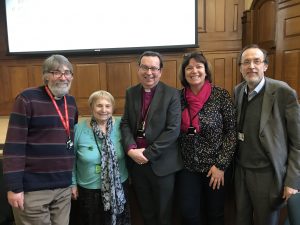 The Bishop of Truro has made a heartfelt plea for fellow Anglicans to redouble their efforts to care for the planet, and our fellow women and men.

Speaking in favour of an environment motion brought jointly to today’s meeting of the General Synod by the dioceses of Truro and London, Bishop Philip said: “Climate change cannot be a matter of indifference for any of us – not least in Cornwall, where it is already having a significant impact on coastal communities and where the main railway to London was cut not so long ago by what would once have been described as a freak weather event but the like of which is now all too common thanks, quite simply, to climate change.”

Bishop Philip also gave examples from his time as head of the Church Mission Society when he had seen the devastating effects of climate change on people living in Argentina and sub-Saharan Africa.

Children are our prophets

“And who are the prophets of our age who are sounding the clearest warning about this? It is not, I fear, the church of God. I suggest it’s rather the school children who were out on the streets last week: children who were chided by senior politicians for doing so. Well I do not want to chide them. I’m with them, 100%.

“Behind this motion is a fundamental desire to see us as a church recover our prophetic edge. And for that to happen I believe we need prophetic people to stir us up: people like our own environmental officer in Truro: someone whose purpose is not to chide but rather to envision and to excite.”

Bishop Philip also talked about his recent vision to the United Downs Deep Geothermal Project at United Downs, which is drilling into hot rocks to produce clean, renewable, sustainable power for years to come.

The motion calls on every diocese to have an environmental programme overseen by one of its most senior members of staff.

He said that he would know nothing of some of the most exciting sustainable energy projects were it not for the diocesan environmental officer, Luci Isaacson, who can not only point out what is already happening, but also open our eyes to potential and possibilities.

Among other things, the motion calls on General Synod to:

Following the vote, Bishop Philip said: “It’s gratifying for all those who have worked so hard on bringing this motion to synod – not least our social responsibility officer Andrew Yates – that the motion received such wholehearted support from General Synod.
“That sends an unequivocal message that the Church of England believes it must act on climate change – not just to all members of the church in this country, but it also signifies our commitment to taking action to our brothers and sisters in other parts of the world where the effects have been, and will continue to be, quite catastrophic.”

The motion was carried by 279 votes in favour, with three votes against and four abstentions.

Next Bishop of St Germans enjoys a whistle-stop tour

National Friendship Day – What could be more friendly than your local Foodbank?