It’s devastating, no matter how sweetly the lyrics of the MASH theme tune were sung. Revd Simon Cade, Director of Education and Discipleship at Truro Diocese, likens suicide to a bomb going off in a family and community. And he should know. When Simon was just 13 he tried to take his own life, fully expecting not to wake up again. 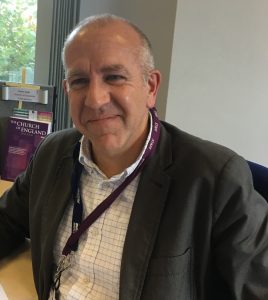 “The reverberations of a suicide, especially of a young person, go far and wide. Of course the immediate family and friends are affected, but also the extended community, a school perhaps, many of whom will be devastated thinking, What if? If only….”

Simon is speaking out ahead of World Suicide Prevention Day on September 10th.

“I made a promise to myself after I survived that I would never forget what it is to be a teenager. It was a different era, but I was self-harming, dangerously underweight and displaying distinct identity issues – but because I was attending school, getting good grades and not rocking any boats, no one reached out to me. I felt isolated and alone, that I was the only one who felt as I did and that the way I felt was wrong.”

And that is the key message of World Suicide Prevention Day, that it’s okay to talk. It’s okay to talk about how you might be feeling and okay to ask someone if they are all right. Professor Jane Pirkis, acting President of International Awareness of Suicide Prevention (IASP), says, “Too often we are reluctant to intervene, worried that we might say the wrong thing.”

Simon says that his experience ultimately led him to ministry and that, because of what he went through, he makes absolutely sure that all the teenagers in his family know that they can text him whenever, and about whatever, and that he will respond. “I need them to know that I’m there for them.” Likewise, in the past, when he had the difficult job of ministering to families bereaved by suicide, he not only comes alongside them but, in many ways, has gone ahead of them. “I can anticipate, perhaps be more watchful. I know something of the space they are in.”

In his current role as Director of Education and Discipleship at Truro Diocese, Simon feels the weight of the responsibility of the church within education. “It’s vital that we engender a wholesome, whole person approach to education – developing, nurturing and celebrating aspects of students not necessarily recognised within the curriculum, like creativity. Education is so much more than what’s on a page – it’s about discovering joy, hope, how to love and to feel loved and valued, whoever you are.” It’s a hard but invaluable task, especially in light of The Good Childhood Report 2017 from the Children’s Society that found that young people’s happiness is at its lowest ebb since 2010.

Simon believes that modern technology plays its part. “I wonder what it would have been like for me if I’d had access to social media – would I have felt so isolated? Probably not, but would I have instead identified myself with a culture of self-harming and been convinced that was okay?” It’s a hard dynamic. And it’s one that worries Simon (and many other parents besides). “I believe we need to be better architects of our world. A system has evolved – Snapchat, group chats, WhatsApp, whatever – that excludes adults, cordons off young people from moderators and protectors and potentially exposes to them bullying when they come home from school until late into the night. And it can be the first thing they see when they wake up.”

It’s a huge issue and undoubtedly a contributing factor in the rise in suicides across the world. In the UK alone there were over 6,000 last year.

This Sunday, September 10th, there is a special service of reflection at Truro Cathedral for people affected by suicide. As part of World Suicide Prevention Day, the key message echoes Simon’s approach, that it’s not only okay to talk but that it can save someone’s life. He said, “We need to normalise talking around suicide, to be more honest with each other and talk about our worries and concerns, for our children, friends and ourselves.”

The Samaritans say that reaching out to people who are going through a difficult time can be a game changer. “People who are feeling low or suicidal often feel worthless and think that no-one cares. Small things like hearing from friends or family, feeling listened to or just being told that ‘it’s ok to talk’ can make a huge difference.”

The service of reflection for the those affected by suicide is at Truro Cathedral, this Sunday, September 10th at 2pm. In the meantime, make a promise to yourself today that if you think a friend, colleague or family member may be struggling, talk to them, let them tell you their story at their own pace and help them to know that they are not alone.

The magic of marriage through the eyes of children

A lone pilgrim on the Cornish Celtic Way