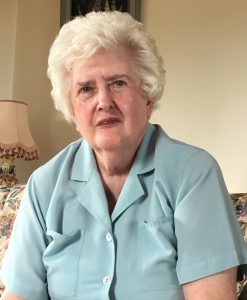 A voice said, “I remember you with plaits!” And Barbara Meades knew that the church she had walked into was where God wanted her to be. The voice was that of Stan, the vicar’s father. The church, Penwerris in Falmouth where Barbara had just moved to. The plaits were the ones she wore as a child. And Stan was a man Barbara had helped pick up windfalls in an orchard in Caversham, way back in the 1940s. All of which helps to give Barbara reassurance as Penwerris Church becomes part of the Transforming Mission in Falmouth.

So when Barbara feels uncertain, she turns to her beloved Lord, knowing that He took great care and planning to make her feel at home when she was a stranger in Falmouth in 1994, and trusting that He is doing the same again amidst all the changes that are going on. There is, understandably, a huge buzz and a lot of excitement in Falmouth with the pioneering missionary and the anticipated explosion of faith within the student population as the town’s Anglican churches amalgamate into a super resource hub at All Saints. But there are also a few quiet voices gently putting up their hands to ask, “What about us?”

The ‘us’ is the older, more traditional congregations of churches like Penwerris, where Barbara Meade has faithfully served since moving to Cornwall 23 years ago. The church, like so many across Cornwall, has suffered from dwindling numbers and an aging congregation that isn’t being restored by younger members. But for Barbara, church and the faith she celebrates there, is everything. It’s her rock, the framework that shapes her life and underpins everything she does.

Most people, particularly as they reach their twilight years, talk about imminent birthdays with pride. Barbara is a little different as it’s not her 80th birthday she’s looking forward to, but the celebration of 80 years as a Christian.

For Barbara, her baptism as an infant, on December 10th, 1937, at St Peter’s in Caversham, marked the start of her journey with God. Although, she laughs as she tells the story, the baptism didn’t go quite according to plan. “After processing to the font, the vicar leant in to find there was no water! My brother and sister howled with laughter!” says Barbara.

Twelve years later, to the day, Barbara was confirmed into the Church of England. “My mother was the main influence in my life, her faith was steadfast and she instilled that in me,” says Barbara. “So much so, I cannot imagine life without the Lord.” Barbara never married, choosing instead to look after her parents, but just before her mother died, aged 93, she told Barbara to go and do something for herself and, knowing how much she loved Cornwall, said she should move there.

Barbara did so, but before she left she spent six months living on Reading University’s campus, where she had worked for the past 40 years as secretary to the bursar, and volunteered in the chaplaincy. “I got to know the students so much better than when working in the bursar’s office, where I usually had to remind them they owed money!”

While living on campus, Barbara developed a great rapport with the students who were always asking for help sewing on buttons, ironing a dress-shirt, or stopping by to chat when they felt a bit homesick. “At the end of term, instead of leaving, they all waited until I got home from work, just so they could say goodbye,” says Barbara. 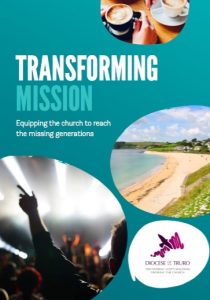 Barbara’s experience with students will be invaluable as the work for transforming mission gets underway. Just as the older congregation are anxious about a new, youthful influx, so too will the younger people be anxious about the older generation. Barbara’s ability to build bridges will help to demonstrate that we are all part of God’s family and that the wisdom, faith and experience of the older generation can support the fresh ideas, perspectives and energy of the younger generation.

Nevertheless, Barbara is still a little apprehensive, “I know that it’s all in God’s hands, it’s just a bit hard at the moment to see where we will fit in,” she says. But, as we’ve found out, Barbara knows better than most that God goes ahead, as He did when she arrived, seemingly randomly, at Penwerris Church. She further explains, “I tried the other churches in Falmouth, but for one reason or another, I didn’t really connect with them. But when I walked into Penwerris the lady who handed me a prayer book was so kind and welcoming – in fact she’s she still here today, aged 99 – and asked me where I was from. When I explained, she said their vicar Fr David Smith, was from the same area and had in fact worked at the Royal Berkshire Hospital, just across from where I was working.” That was the first step, but affirmation came at an Epiphany party a few months later.

“I remember you with plaits!” said a voice. It was Fr David’s father, who was visiting. “Your mother used to bring you along to the market garden, in Caversham – you used to help me pick up the windfalls!” Barbara looked closely at him and realised he was Stan, she never knew his surname, the man she had indeed helped to pick up apples from the orchard when she was a child.

“I was amazed. It felt like confirmation that this was where God wanted me to be. Once his son found out how involved I’d been at my previous church, well, that was it. I began as the electoral roll officer, then secretary to the PCC, then church warden…” And so, Barbara became just as much a part of church life at Penwerris as it became part of hers, so much so that the one probably wouldn’t do so well without the other.

Barbara’s trepidation at the changes that are afoot are understandable and have not been ignored. But just as God went before her to Penwerris, there is a very strong sense that He has done the same again, laying the groundwork for the changes ahead.

Nine will be ordained during this year’s Petertide services