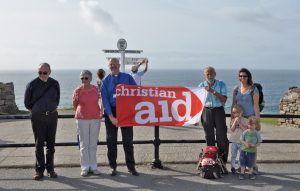 Having endured midges, mizzle and an escalating myopia John Wilmut, 75, from Stoke Climsland, Cornwall, has arrived home having completed all 1,105 miles of the John O’Groats to Land’s End walking challenge.

John, who was greeted at the end by friends and family including his vicar Rev Tony Stephens and the Archdeacon of Cornwall, the Ven Bill Stuart-White, was able to raise £3,600 which will go towards helping Christian Aid to bring education and vocational training to children in hugely challenging areas like Sierra Leone and South Sudan.

Walking up to 20 miles a day for 70 days, John’s highlights included camping in a bothy in Scotland when he expected to be in the open air and walking through the Black Mountains in Wales, but most of all he is thrilled at the improved educational opportunities the funds raised from his walk bring.

Asked why he did it, John explains: “In 2012 I walked from Land’s End to John O’Groats, raising over £10,000 in support of Christian Aid’s work in education in Sierra Leone and elsewhere. However the problems and the need remain huge so, after an interval of four years – during which I dithered over whether I wanted to make another effort of this kind – I decided to do another walk, but this time walking south instead of north.”

Having worked in several developing countries throughout his career, John says, “I saw some of the impact that poverty had on children’s education – drop-out from school, poorly qualified and poorly paid teachers, the lack of books and the decrepit state of many schools. As part of its commitment to education, Christian Aid and its partners are working to improve conditions for children in the world’s poorest communities. The aim is to improve learning, to enrich their lives and to extend their opportunities. I thought that was worth walking for!”

Nigel Quarrell, Christian Aid’s South West Regional Manager, says “We are truly in awe of John’s incredible efforts, and so very grateful. Many fellow supporters have been inspired to support John by hosting him, feeding him, and sponsoring him – the impact of his efforts is far-reaching. Most importantly, he has raised a considerable sum of money that will go towards our education projects overseas, helping thousands of children have a brighter future and a hope to see their communities transformed.”

Songs for Earth to be held in Truro Cathedral