The First Lady of South Korea will be in Falmouth on Friday to take part in a World Peace Concert as part of the G7.

First Lady Kim Jung-sook will join Chair of Cornwall Council Pauline Giles for the concert which will involve the Cornish Sinfonia and Cornish children’s choir. The event will take place at All Saints Church in Falmouth on Friday, June 11 at 2pm. 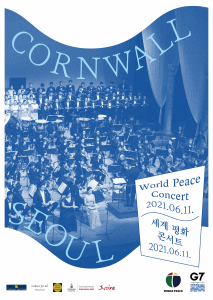 Concert Project Manager Daniel Kellerhals said: “The fact that leaders of seven powerful countries of the world meet personally, talk to each other, look each other in the eyes, is a promise.

“As musicians and with our music we want to tell them: Do not make mistakes! Harmonies, dissonance, and rhythms are the essence of human life. Life is never without conflicts. Working hard on solving the issues implies harmonious approaches, rhythm means moving forward.”

Canon Bill Stuart-White, Parish Priest at All Saints Falmouth, said: “All Saints are delighted to have the opportunity to host this historic concert. The church makes a wonderful venue on account of its light, spaciousness and glorious acoustics. We are pleased and honoured to play a part in the G7 proceedings as part of the Cornwall Council Cultural programme by hosting the concert.”

All welcome to Annual Readers’ Service

Diocese of Truro @DioTruro
The Church and Climate emergency. Are we doing enough. Young people give it to us straight. #G7Summit #G7UK… twitter.com/i/web/status/1…
About 11 hours ago
ReplyRetweetFavourite