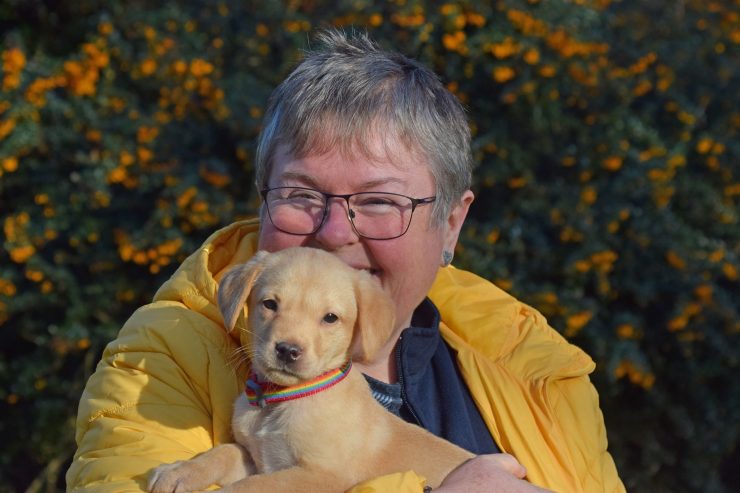 Canon Vanda Perret with Bella, the puppy who squeaks during prayers

As Revd Canon Vanda Perret says in one of her recent blogs, one constant throughout the history of church life and the way people worship, is that it is always changing. Perhaps not quite as radically or as quickly as it has changed during these Covid dominated months, but change is woven into the fabric of worship. Another constant, of course, is God. He hasn’t changed, He hasn’t left us and as Vanda says of the current re-opening of churches, “When we gather to worship together God will be with us in the same way God is with us as we worship at home, on the internet, on the TV and radio.”

What to keep from lockdown and what to let go of

So, what can we learn from these changes? What will we keep, and what will we let go of?  When churches closed during lockdown, Revd Caspar Bush, like many other clergy across Cornwall, found the new ways to reach out energising. Together with his supportive team of lay people and clergy, they tried out different methods from Zoom to Royal Mail, Facebook to phone calls and YouTube to emails. Caspar looks after five churches in the Redruth benefice as well as overseeing the Eight Saints Cluster, so feedback was never in short supply! Being flexible to change and working together have got them through.

“We’ve tried all sorts of things, including after-church coffee via Zoom. But that involved random breakout rooms, so you never knew who you were going to be sharing coffee with, which a few found a bit scary!” So they moved to groups for the five churches, which gave a level of continuity but also allowed for those who wanted to mix it up a bit and pop in and out of different sessions.

“We’ve tried all sorts of things, including after-church coffee via Zoom. But that involved random breakout rooms, so you never knew who you were going to be sharing coffee with, which a few found a bit scary!” 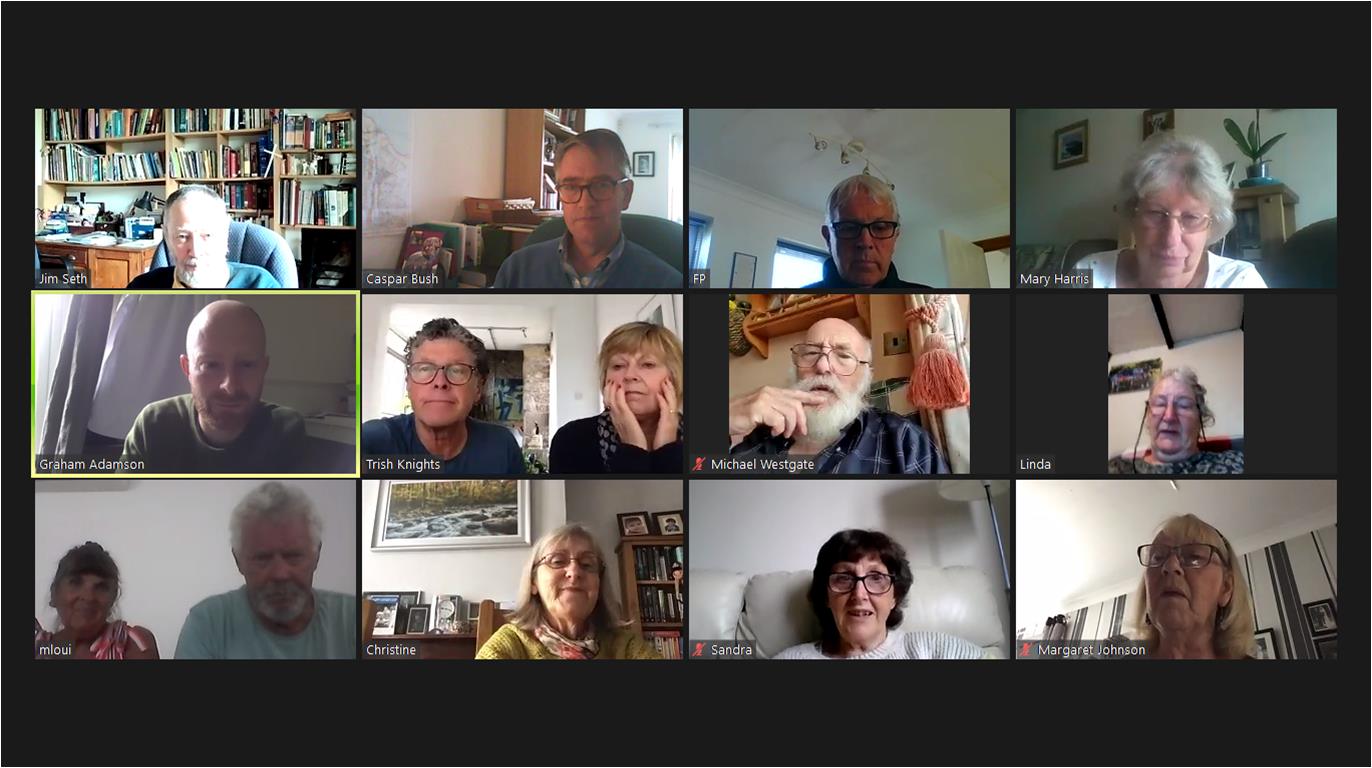 One thing Caspar says is definitely a keeper is the morning prayer service. “It’s just been delightful, seeing all those faces in the morning.  We start with a bit of banter, while we wait for the predictably late crowd, (so not that different!), then by the time we have finished, I look at the shared screen and everyone is there. There is just this lovely sense of togetherness and shared purpose.” As the benefice covers a wide area, it also means that people don’t have to get in cars, travel and then try to get warm in an inadequately, and expensively, heated church.

There is just this lovely sense of togetherness and shared purpose, Revd Caspar Bush

Morning prayers have been a collective effort with five others –  Readers, retired clergy, team vicar Deb Grigg and curate, Revd Graham Adamson. It means that the workload can be shared, and Caspar has been able to ‘move’ or ‘Zoom’ around to the many other churches under his care. On occasion, he’s dialled into the fourth Zoom call by 9.30am, but it has most definitely cut down on transportation costs to the pocket and the planet.

It also means that people can take part in the comfort of their own homes although Caspar is pretty certain he hasn’t yet seen anyone in their dressing gown. The lockdown also made it easier for people who work to join in this part of church life as working from home affords greater flexibility.

And so too is evening prayer, says Canon Vanda Perret

At the other end of the day and further down Cornwall, Revd Canon Vanda Perret has been sharing daily evening prayers as part of the Land’s End Churches’ offering, via Facebook. They are a lovely, gentle way to end every day and the advantage of Facebook is that if you cannot catch the prayers live, you can watch and be ‘present’ later.

“It’s funny as it feels surprisingly intimate and connected, even though I’m just talking to a screen. I know people are there or will be. Since lockdown, I’ve had more requests for prayer through this than at any time ever in my 25 years of ministry, which includes three years as a prison chaplain.” Although Vanda is keen not to keep doing things just because that’s currently the way things are done, she feels they have gone beyond a point of no return in terms of online provision, for which she is grateful.

Lockdown has brought out a real hunger for something, an encounter moment that touches people where they are.

“These are interesting times that have brought out extremes of character, the best and the worst of people. The worst largely because of fear and uncertainty. But there is a real hunger for something, an encounter moment that touches people where they are.” Vanda believes that people have discovered the church is now instantly accessible. Taking away the building, the traditional way of doing things which can feel excluding if you don’t know what to do, and that fear of the unknown, has made way for curiosity.

Online access has really helped to feed that curiosity. It’s felt personal and genuine – can that always be said of traditional worship on a Sunday?  “The charge that people only dip in and out of online worship and are not properly engaging, is, I believe, out of kilter with what’s really going on,” says Vanda. “How can we know that people are even 80% present for the time they spend in church on a Sunday? Just because people are standing and sitting with everyone else does not mean their hearts and brains are engaged. I might be talking to a screen but there is an opportunity to enter into a conversation underneath, which many, many more people are taking than they ever did when the churches were open.”

The search for prayer during lockdown

“Prayer isn’t about a performance, but about communicating and having a relationship with God, in all its stumbling messiness.”

Canon Vanda says that people are not necessarily asking for prayer around Covid, but about relationships, ongoing health issued, finances, the stuff of life. “I also think it’s easier for people to engage because, perhaps for the first time, they are seeing me as a person who lives a life in just the same way that they do – in a house where a puppy finds a squeaky chew toy in the middle of prayers, or visiting children shout out from upstairs. I always think, I’ve started so I’m going to finish! It’s about getting across that prayer life is ordinary, and messy and full of life. It’s OK to stumble over the words. It’s real. I don’t know how to pronounce some of the names in the Bible and that’s OK. I don’t practice or rehearse. When I pray sometimes I bore myself! And that’s OK!”

It’s OK to stumble over the words. It’s real. I don’t know how to pronounce some of the names in the Bible and that’s OK. I don’t practice or rehearse. When I pray sometimes I bore myself! And that’s OK!”

Live streaming – seat of the pants stuff with moments of utter hilarity.

Caspar has had similar experiences. His team chose to go down the live (Zoom) services, rather than the pre-records uploaded to YouTube. “It’s very seat of the pants stuff and not especially good for blood pressure, and we have had some ups, downs and out and out hilarious moments.” One such moment was when, during a sermon and before everyone had understood the mute function on Zoom, a loud voice boomed across the airways, “Oh shut up!” Caspar says it was never fully determined if the voice was aimed at a dog or the speaker.

On another occasion, curate Graham, bent down midway during his sermon and never came back up. The signal had failed, the screen froze but nobody realised. “We wondered if he’d done a runner! Funny for us, but not so funny for Graham who uploaded his sermon later on YouTube!”

The seat of the pants stuff has also had its advantages. Reader in training Jason Hoole-Jackson volunteered for morning prayers at the outset and once a week leads worship. “The most helpful thing is I can send him instant feedback,” says Caspar.  “‘That was really good, I loved how you left space for pauses, great images, maybe slow down a bit here when we’re all talking together….’ Then he gets another chance the next week. Normally if you’re a reader in training you get that chance once a month if you’re lucky!” I’ve learnt a lot from it. It’s made me realise we should be offering the same experiences for local worship leaders, so that’s a learning point for me.”

In all of this online provision, of course there have been people who haven’t been able to, or haven’t wanted to, engage online. That’s been hard and frustrating for everyone. Weekly postal notices and telephone calls, and the ability to watch services online after the event have gone some way to mitigate that, but they don’t make up for the vibrancy that comes across from the shared experience online.

There are many more practical observations in the life of clergy that have come out of this time of lockdown. Enjoying a vicarage as a family home being one of them. For many clergy, particularly when there is no village hall, every meeting takes place at home. On a very basic level that means private loos become public, kitchen facilities communal and boundaries between work and home life more than blurred. One thing Vanda has enjoyed has been to not leave the area on a day off, simply to avoid the constant flow of visitors. “Of course I welcome visitors, but even vicars need a day off!” Online access has given a very personal insight into clergy lives, but it has also created helpful boundaries, releasing clergy to do the job they felt called to do.

It has also been true that all the ‘managerial’ type work that clergy have to become involved in, especially when looking after multiple church buildings, has largely been absent these past months. “We’ve been able to focus on the work we were called to do,” says Vanda. She makes the point that there are always two churchwardens, one to tend to the fabric of the building and the other to tend to liturgical matters. “There is definitely a case to be made for a stipendiary clergy to be assisted by someone who can relieve them of the management duties that are inevitable from maintaining old and failing buildings, releasing us to be the curer of souls that we felt called to be.”

Curing of souls has been front and forward these past months. It has been fabulous to see how flexible the Church of England can be, how our clergy and lay people across Cornwall have risen to the challenge and then some during lockdown.  Treasure that has been uncovered, here’s hoping it won’t get buried in the quest to normalise worship.

A Mermaid, a camper, an unlocked church and a tin of Spam

‘The people of Beirut need our help now, they can’t wait’ – Bishop Philip calls for people to give to Lebanon church fund

Wait, pray, love as a school chaplain even during lockdown