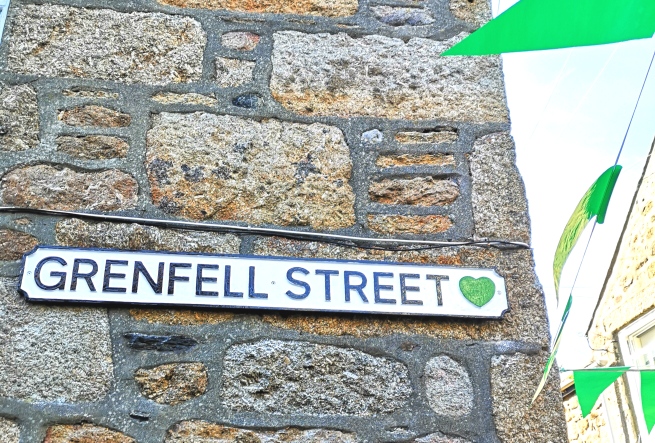 It wasn’t just the sun that was shining in Mousehole last Thursday as a very special Grenfell Street sign was unveiled. Love, community connections and compassion shone across this picturesque fishing village that was picked out long ago to partner with the people of Grenfell. 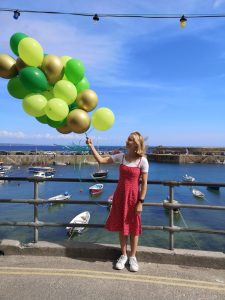 Throughout the day, as the green balloons and bunting went up to prepare for the unveiling of a very special street sign, locals and holidaymakers shared their thoughts on the linked communities. They said how they loved seeing the families from Grenfell enjoying themselves in and around Mousehole and how glad they were that they were now part of their community.

Following the terrible events of the Grenfell Tower fire two years ago, Cornwall Hugs Grenfell reached out and offered free holidays to survivors, the bereaved and firefighters. Founder Esmé Page prayed with her husband that if the idea was from God, that He would put wind in its sails. Two years and almost 500 holidays on, that God-blown wind has created an extraordinarily beautiful bond between the two communities, 300 miles apart. 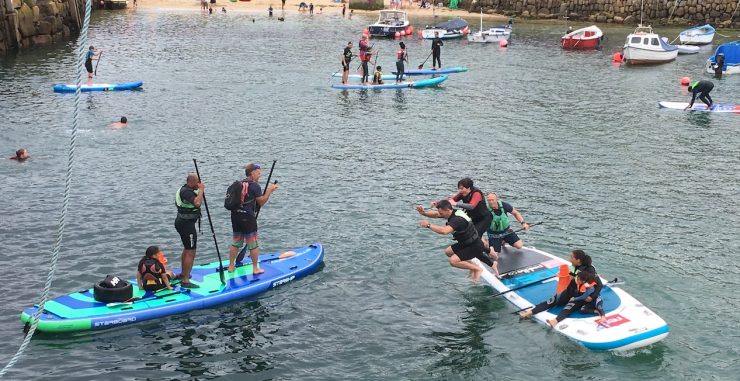 The Grenfell Street sign symbolises that solidarity. It’s significant for so many reasons, and not just because it’s the first sign ever to be allowed a green heart. Grenfell street in Mousehole, which is at least 200 years old, was named after a prominent local family called Grenfell, but never sign-posted. From that same family, descendant Admiral Field Marshall Wallace Grenfell gave his name to Grenfell Tower. God preparing to put wind in sails before the boat was even built!

The street sign was designed by Cormac and installed with the help of Cornwall Council. The iconic green heart is a symbol of solidarity used by Grenfell United, who work closely with Cornwall Hugs Grenfell, and is depicted at the top of the tower itself, against its white wrapping.

Before the sign was unveiled, the small Mousehole street was crammed with people as the Mousehole Male Voice Choir set the tone with a moving rendition of ‘You’ll Never Walk Alone.’ The Lord Lieutenant Colonel Bolitho congratulated Esmé and all involved for the brilliant, uplifting and selfless way they have responded to the tragedy. 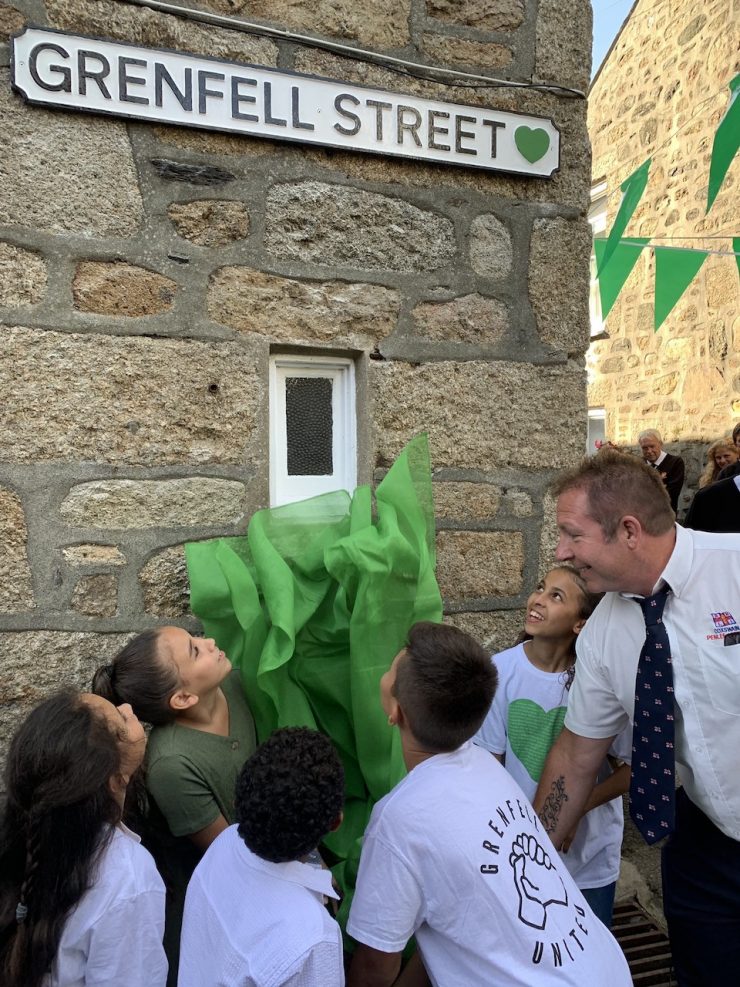 The street sign was triumphantly unveiled by Grenfell Tower survivors and bereaved children Hafsa Khalloud (15), Sara Chebiouni (11) Kai (11), his sister Maia Mussilhy and Abem (7) teamed with Patch Harvey, coxswain of the Penlee lifeboat. Patch was chosen by Cornwall Hugs Grenfell to represent Cornish hospitality as Penlee lifeboat station, RNLI, has been a key partner of the charity, repeatedly welcoming guests aboard the Ivan Ellen during their respite holidays.

Karim Mussihy, Vice Chair of Grenfell United and one of the 32 guests who had joined the group holiday in August, spoke of how the Cornwall community has been with them from the days immediately after the fire, offering respite and friendship. ‘This sign provides a permanent marker of the partnership between two diverse communities, to be recognised by generations to come. As our fight for safer housing continues, it’s encouraging to feel the solidarity so strong, even 300 miles away.’

‘This sign provides a permanent marker of the partnership between two diverse communities, to be recognised by generations to come. As our fight for safer housing continues, it’s encouraging to feel the solidarity so strong, even 300 miles away.’ 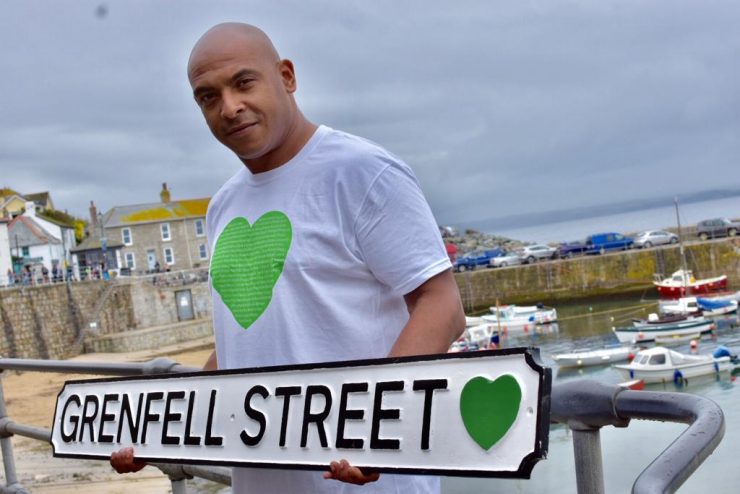 Bishop Philip spoke a blessing of how the sign will stand for friendship, partnership and justice and the “… the Cornish spirit of One and All and the Grenfell spirit of being united. May those who walk along this street see it and smile and find for themselves, inspiration to partner with others, to grow together and be family together.’

Afterwards, Cornwall Hugs Grenfell arranged a thank you supper for key supporters of the charity since it began and to celebrate the unity of Kernow and Kensington. It was a wonderful time to give thanks for all the good that has flowed from two communities standing together. It also looked to the future and the hope that change will come, particularly for those still living in buildings clad and managed in the same way that Grenfell Tower was. 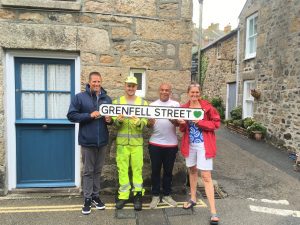 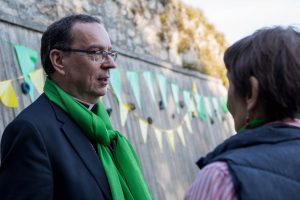 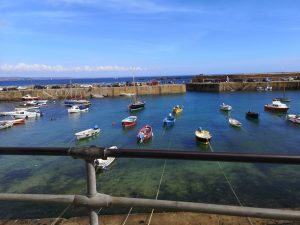 The power of a blessing, “We can’t imagine how you feel, but tell us.”

Revd Jeremy Putman closed the day with a powerful blessing about how the words of a blessing can be like words before a meal shared by old friends, or the presence of a stranger standing with you when no one else will. Or from a community who say, “We can’t imagine how you feel, but tell us.” Or they can be like an independent review that calls out politicians, or hands that dismantle walls of division or feet that march for change. Or they can be like the hope we feel from knowing the one who is hope. The words of a blessing can bring change.

Change has come to these two communities, as Esmé said at the unveiling, “I believe this is truly a sign of our times! We hear so much about division in society but this solid ‘granite’ solidarity, that has grown between our two communities and captured in this sign gives great hope. It expresses how ordinary people feel – they just want to support each other, however great the distance or apparent differences.”

“This is truly a sign of our times! We hear so much about division in society but this solid ‘granite’ solidarity, that has grown between our two communities and captured in this sign gives great hope. It expresses how ordinary people feel – they just want to support each other, however great the distance or apparent differences.”

Click on the link for the film below which really captures a very special day.

The light that shines through the Cross of St Piran Awards

Diocese of Truro @DioTruro
Creation Care Wednesday shorts: A series of webinars for the Season of Creation, linking environment with theology… twitter.com/i/web/status/1…
About 9 hours ago
ReplyRetweetFavourite