A church setting up a company? Must be the Bodmin Way 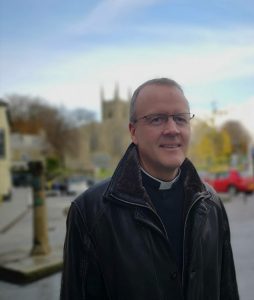 When you think of company start-ups, you don’t naturally think of them in the context of church life. But that’s exactly what they’re doing in Bodmin. They have started Bodmin Way, a company to fund their social enterprise work and staff employment including a Pioneer Minister.

“We have four churches and they have all agreed that starting a company together is a good way to help make an impact on the social problems endemic in Bodmin,” says Revd Paul Holley, Team Rector of the Bodmin Team Benefice. Four churches means four PCCs. That’s no mean feat to get everyone to agree to such a radical plan.

“I’m not sure, but I think we are the only church in the diocese to have started a company,” says Paul. So why? What’s the thinking behind setting up a company and how will that make a difference to the community? Paul has a background in health and well-being from his time working with the UN in Switzerland, exploring how Anglicans can have a voice in the medical community. He is convinced that the church has a significant role to play at a local as well as national level.

Stepping into the widening gap between need and funding

“The need is so great and the funding so small. As a church community we believe we have to do what we can to step into that widening gap,” says Paul. The acid test is always, ‘What would Jesus do?’ and of course He would be there, in the thick of it – but would He set up a company?

The acid test is always, ‘What would Jesus do?’ Of course He’d be there, in the thick of it – but would He set up a company?

“Setting up a company releases us,” says Paul. “We need to be self-sustaining and to know that whatever we start we can finish. Having a solid financial base will certainly help.”

Paul was also struck by the low pay, the hardworking population and lack of opportunities in Cornwall. “Locally, the level of unemployment is huge and the arising social problems disastrous. If we can make even a small dent in that, or at least lead by example, that has to be a good thing.”

Sometimes that means paying people who previously volunteered, which can be difficult for both parties to reconcile. “Volunteering can be onerous, time consuming and relies on people being sufficiently wealthy to give their time for free – but what if you’re really good at the job but just can’t afford to give your time for free? Isn’t it better to release that person to do the job we need to be done by paying them so that their needs can be met too?”

How will the company be funded?

The four parishes have been inspired by Bodmin Way. It gives shape to their vision for the community and a tangible, physical manifestation of love in action. Employing a pioneer minister has been a master-stroke, especially as the role has been filled by Revd Elaine Munday. Elaine is entrenched in community life, having once been a local pub landlady, a teaching assistant at Bodmin College and lives on one of the most challenging housing estates in the area.

Getting stuck in with trowels and paintbrushes

“It’s a question of seeing what needs to be done and doing it,” says Elaine. “With schools struggling to cope with continued budget cuts, there are things that we can do – like helping to build a poly-tunnel.” Elaine explains how head teachers in the past have been wary of ‘church people’, fearing subterfuge and not-so-cleverly-hidden agendas. “They’ve been blown away by our willingness to roll up our sleeves and just help in the most practical of ways.” Elaine is a very visible presence in the schools. As well as wielding a trowel or a paintbrush, she also takes on the mantle of chaplain to the college, one of the town’s secondary schools and, hopefully, soon to the primary schools.

Stepping out in faith as a pioneer minister 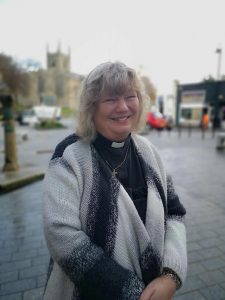 Elaine took a leap of faith when she gave up her job to become a pioneer minister. The role is non-stipendiary, so will rely on the success of the Bodmin Way. Thankfully, grants from the Joseph Rank Trust, the diocese and the deanery help but, to a certain extent, Elaine is partly responsible for paying her own salary. “As I’m non-stipendiary I can retain 80% of the fees from weddings and funerals, and thankfully there’s always a ministry in these life events,” she laughs. And with her work in the schools it wouldn’t be too much of a leap for the number of baptisms to go up as well. Cash aside, these nuts and bolts of church life are all opportunities for ministry and very often the only significant touchpoint between a community and the church.

Paul says that his approach to ministry is to accompany, inspire and facilitate to see people take over and hold their own faith and light in the church. Bodmin Way feeds into that. “We have instigated a pilgrimage around the local area called, not surprisingly, the Bodmin Way. Working on that really highlighted the need for us to be professional, to establish an identity and demonstrate a level of expertise – we have to do all of those things if we want to engage with local businesses and attract people and investment.” But instead of bringing in people from outside of the community, Paul wanted to nurture the gifts of those already there, those who knew the area and its challenges. “In this way people can take ownership, be empowered and help to grow and strengthen their own community from the inside out.”

Exciting times are upon Bodmin. As Paul says, “A town that has been known more for its dungeons and dark days is showing lots of green shoots of hope, light and transformation.”

“A town that has been known more for its dungeons and dark days is showing lots of green shoots of hope, light and transformation.”

Thy Kingdom Come – what’s going on