Befriending the bats at Lamorran’s church

Bats are a common ‘problem’ facing many of our churches but one church in the diocese says the answer is to stop seeing them as something to be eradicated and start looking at how to live alongside them. 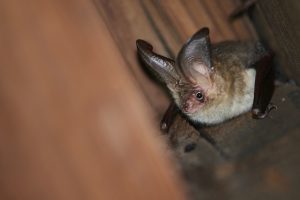 St Moran Church at Lamorran closed in 2014 when cleaning became more than the volunteers could cope with because of the mess left by bats. Nick Jeans, a retired land agent who is acting as Clerk of Works, says the community ‘just didn’t know what to do’ but help has come via the Bats in Churches project. St Moran was one of 120 churches selected (including three others in Cornwall) out of over 630 that applied.

The Bats-in-Churches Project is run by a consortium formed by English Nature, the Church of England’s Cathedral & Church Building Division, the Bat Conservation Trust, English Heritage and the Churches Conservation Trust and is fully funded by the Heritage Lottery Fund.

Nick said: “What started out as just a simple project to find a humane way of housing our three resident bat colonies, whilst at the same time allowing the congregation to use the church for worship, has developed into a more or less full church restoration project, which in total will leave no change out of £213,000.

“The project has funded all the survey work which looked at the size of the bat colonies and how the congregation used the church and then the ecologist and architect devised a scheme to separate the bats from the congregation.”

The project not only funded the ecologist for the initial work but is also picking up the bill for a further three years so that a study can be done into the effects of the work at the church. The parish are in addition having to raise money to cover floor, ceiling and wall plaster repairs totalling £72,000 + VAT.

Works actually began at the beginning of February, although things are currently halted to allow the bats maternity season to pass quietly.

Nick said: “At the start we had to completely clear the church of furniture. It will all need to be cleaned of six years’ worth of bat droppings and urine stains before it can be replaced. Then the work began to construct two bat lofts providing both roosting and flight space. These lofts are positioned one in each transept, above the arches. Hand in hand with this construction, we have partitioned the roof voids to prevent unauthorised bat access to the congregational spaces in the church.”

The team at Lamorran are determined to make the most of the opportunity they have been given. They are hoping to re-open the building later this year and already have ideas about how to embrace their bat neighbours to help grow their church.

“We want to use the building for the benefit of the community and we have all kinds of ideas from a gardener’s chapel to running bat workshops.”

Nick says the experience with the project at Lamorran could also benefit other churches. “Not only have we learnt a thing or two that we are happy to share with others but through this project and the development of understanding around the licensing issues, it will hopefully help to streamline things for other churches.”

Nick’s main advice for others with bat issues is to learn to live with them. “We have to get away from the idea of eradicating the bats. They are God’s creatures too. So many old buildings are being converted that bats are losing their habitats. By learning to live with them we are caring for creation.”

On a practical note, Nick says finding an ecologist who really knows and understands bats is key. “It really is about getting the right professional advice in terms of the ecologist and the architect and the Bat Conservation Trust may be the best place to start.”