Embracing evangelism as an Anglican curate

Perhaps the biggest change for Graham Adamson during his year as deacon in Redruth was taking 14 funerals – probably ten more than he’d even attended in his life. As an evangelical Christian, the next would be embracing, and enjoying, a churchmanship very different to what he’s used to.

Graham describes himself as an evangelical but is quick to offer clarity. “It’s not helpful to use labels, and I know that as soon as I say I’m an evangelical you can almost hear people’s first thoughts – ‘Make America great again!’” But being evangelical doesn’t have to mean an association with any of the damaging, narrow-minded and excluding views that have become associated with the term.

Being evangelical is what the Anglican church is all about

That being accepted, it still raises a question: of all the routes to take to follow a calling, why choose the Anglican church? “Being evangelical is part of what the Anglican church is all about,” says Graham. “It’s there in the creed, articles and liturgy. But for me, it’s about the centrality of who Jesus is, what He says and taking Him at His word – which, next to loving God, was to love your neighbour as yourself.”

“For me, it’s about the centrality of who Jesus is, what He says and taking Him at His word – which, next to loving God, was to love your neighbour as yourself.”

Graham was drawn to the richness of the Church of England, “The commonality that unites us all – not the lowest common denominator but the building blocks of faith. The love of God that is just as rich in a ‘Fresh Expressions’ church like Soul in Porthtowan as it is in Truro Cathedral or any of the churches here in our benefice in Redruth.”

Being young and energetic, does Graham want to shake things up and change them? “No! I’m here as a curate. My role is to listen and learn, and I’m learning a lot.” That doesn’t mean he’s letting go of his willingness to look beyond or his dropping his guard against getting stuck in a traditional rut. “It’s more that I’m appreciating that energy and enthusiasm for faith isn’t the preserve of the charismatics. It can happen all over the Anglican church, whatever your tradition, manifesting itself in different, but still transformative, ways.

So, day to day? Toast is a big feature. It’s an afterschool club for that transitional time when children move from primary to secondary school. Toast is made, but so are friendships and a growing trust in the church that it can be a place relevant to young lives. “It’s been great and keeps growing – we have around 20 children here each week.” 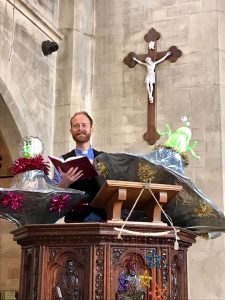 Graham preaching with friends from the Arts Festival!

There’s plenty for Graham to get involved in, with lots of community projects in the town. The most recent was the popular St Andrews Arts Festival that welcomed over 2000 people last year. “It is a very outward looking, community-minded benefice in an area of significant deprivation. We look to see how we can serve and uplift, like with an arts festival.”

Graham will be priested on Saturday, June 29th, at Truro Cathedral