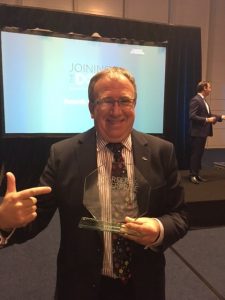 A PIONEERING scheme that helps prepare young people for the world of work has won a national award.

Ali Carnegie, (pictured) who is Managing Director of Cornish firm Total Energy Solutions as well as being a Local Worship Leader at Stoke Climsland Parish Church, won the Career and Enterprise Company National Enterprise Award in the SME-sized employer category for his Mentor+ project.

Ali was presented with the accolade at the Career and Enterprise Company ‘Joining the Dots’ conference, which celebrated how companies and partners are working together to help youngsters into the workplace.

Launched as a pilot scheme in 2014, Mentor+ brings together local business and church communities to help bridge the gap between education and employment in Cornwall.

Churches, and the communities that surround them, have many retired or semi-retired people with the understanding and skills necessary to mentor young people into employment and is a fantastic example of showing faith by actions in the community.

Led by these volunteer mentors, the project equips young people with the tools they need to head out into the world of work by helping them develop an understanding of what employers are looking for, helping them with job applications, CVs and interview skills, identify their strengths and weakness, while also building confidence.

Mentor+ saw excellent results in its first two years and leaders are now hoping the project will be taken up and expanded throughout the region.

Of the Duchy College students who embarked on Mentor+ in 2015/2016, 100 per cent said they understood what employers were looking for and 100 per cent understood their own strengths and weaknesses. In addition, 96 per cent were more confident in writing a good CV, 93 per cent had a clearer idea of potential careers to suit their skills and 86 per cent were more confident in their ability to perform well in interview.

Mr Carnegie, lead coordinator for Mentor+, said: “We are delighted that Mentor+ has been recognised as best practice for its work in supporting young people in preparing for the world of work.

“We have worked for several years with students from our local college aiding them in their volunteer modules by clearing and maintaining the churchyard. It was a conversation with a student that sparked the idea, and with God at the helm doors opened and off we went.

“We have long recognised the need to support youngsters in our region in preparing to enter the workplace and are at the forefront of a number of employability mentoring projects.

“We believe that Mentor+ has the ability to change lives and should be rolled out across the whole of the region for future generations.”

Kim Conchie, Chief Executive of Cornwall Chamber of Commerce, said: “We are very supportive of the Mentor+ programme and delighted that Ali has won this award.

“As a programme, it puts the drive of young people to succeed into a mix of private hands and public responsibility, which I think really works well.

“We obviously champion the private sector and encourage schools to embrace business people to help young people get their thoughts straight before deciding which career to take.”

The Archdeacon of Cornwall, the Ven Bill Stuart-White, said: “I think it is fantastic that Mentor+ has won this award.

“We are looking at talking further with Ali about Mentor+ to encourage the scheme in different locations across the region.”

Ali is now in the process of trying to secure funding and sign up new business volunteers to help progress Mentor+ into the future.

Do you have what it takes to help shape the future of mission and ministry training in Cornwall and Devon?

Diocese of Truro @DioTruro
The Creation Care team have shared some prayers - you can download the full document from the diocesan website here… twitter.com/i/web/status/1…
About 13 hours ago
ReplyRetweetFavourite