Why all schools need Culture of the Heart 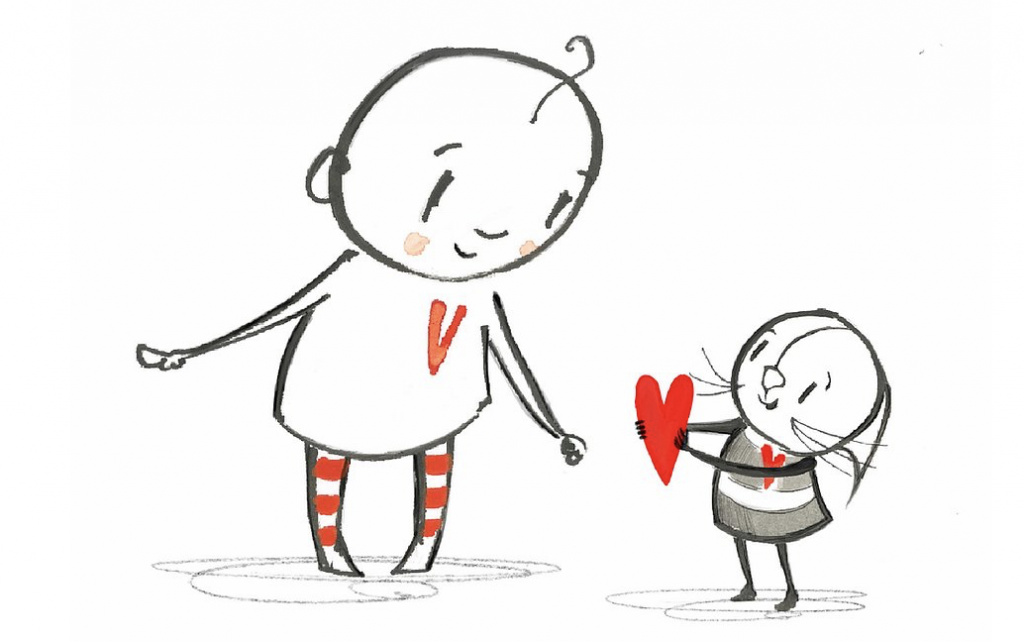 Tell a five-year old he is rubbish at maths, disruptive or even stupid, by the time he is seven he might believe it. He could pull away from learning, feel badly about himself and begin to define himself with the harsh words he has absorbed.

Work with that same seven-year old and introduce him to the ethos behind Culture of the Heart. Encourage him to swap the negative words for words that affirm him and there is a very good chance he will embrace his new narrative, recognise his own self-worth and even recognise and value the worth of his peers. Better still, always affirm him, focus on the positives and help him grow into his God-given potential. 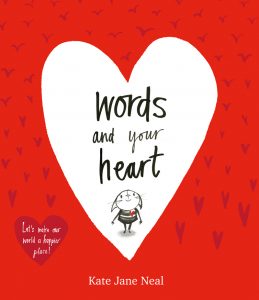 Kate Jane Neal has committed the past five years to pursuing a belief that we are all hard-wired for relationships. And that good relationships with others begin with a good relationship with ourself. She began by writing and illustrating a highly acclaimed and beautiful book called Words and Your Heart, showing children (and adults) the power of words. How words can hurt but also how they can positively affect and even transform lives. It’s a book that stops people in their tracks when they read it – we’ve all been hurt by cruel words and, let’s be honest, probably hurt others with the words that we’ve used.

Kate, who is a Christian, felt very strongly led that God wanted more from her and to take what she was learning into schools. This was a bit of a surprise. Brought up by parents who were teachers and married to a teacher, teaching was absolutely the last thing Kate felt she wanted to do. “I know how hard teaching is, I’ve been up close and seen how much it can demand from you and your family. It really wasn’t something that I wanted more of in my own life – I was very happy writing and illustrating books!”

The inner niggle persisted. Kate went on a journey that simply began by writing out what it meant for everyone to be created in God’s image. “I started with the obvious – saviour, redeemer, deliverer but then I thought about what God means to me and what I’ve found to be true of Him. God is good, faithful, kind, trustworthy, creative, fun – the list went on and on.”

How quickly we move away from God’s factory setting

Looking at the stream of words, Kate felt God say that this was the factory setting of every human heart. “But we live in a culture that doesn’t always empower us to fulfil the identity we were created to be. And sadly, that shift away from the default setting can start from a very early age.” You don’t have to look very far for confirmation. There is so much  press at the moment about the poor state of our children’s well-being. Why are so many of our children hurting and unhappy?

Kate, who is a mother of four, has watched her children go through the educational system. “There is so much that is good – amazing opportunities, explorations and expansions of literacy, science, maths. But there’s also been some stuff that really isn’t OK, emotionally and relationally within the school system. We only have to look at the statistics for mental health and wellbeing of our children today, to know this is true.” Kate believes some children lack an understanding of their own worth and value, which leads to not valuing others, therefore creating a culture of not treating others with the dignity and respect that we all deserve.

The Children’s Society report on childhood confirms that. Our children are officially the most unhappy in Europe, and a lot of that unhappiness comes from not having good relationships. Successful relationships make us happy, not having them makes us sad – whether that’s relationships with friends, family or other significant people in our lives. So what is getting in the way of forming these important relationships? If we’re born to be relational, why is it so hard? 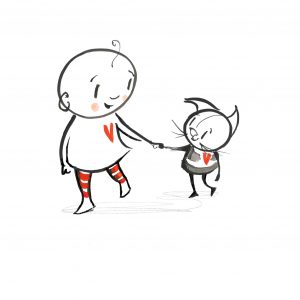 If we’re born to be relational, why is it so hard?

How can Culture of the Heart help?

Let’s go back to Kate and that five-year old, who is now seven. In the early days, when working out what it meant to take the power of words into schools, Kate ran workshops in primary schools around Cornwall. “In one particular class, there was a little lad with special needs and the teacher offered to take him out if he was disruptive. But he stayed and was really engaged and at the end, when I was working on an illustration with the class, I asked the children if they had learnt anything about themselves. All hands shot up. I then asked if anyone wanted to share what they had learnt and this little boy’s hand went up, so I asked him and he said, ‘I’ve learnt that I wasn’t born evil like my mum said. I’m actually good.’ And that’s why I’m doing what I’m doing.”

‘I’ve learnt that I wasn’t born evil like my mum said. I’m actually good.’ And that’s why I’m doing what I’m doing.” 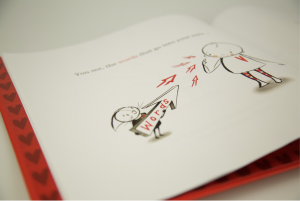 In another workshop, Kate talked about words as deadly arrows and how much they can hurt. She asked if anyone was brave enough to share if they had ever had words like that thrown at them. She knew a lot of the children and so felt on safe ground picking a child that she knew to answer.

“… This beautiful child, aged only seven, said she had been called fat. By the time five more children had answered I had to stop as it was heart-breaking”

“But this beautiful child, aged only seven, said she had been called fat. By the time five more children had answered I had to stop as it was heart-breaking. So we did an exercise where the children wrote down their negative words, screwed them up, threw them away and chose a new positive word from a lucky dip.” There had been one child in the group who had been very busy and possibly distracting until Kate enlisted him as a helper. When he chose his word, he began rocking as he held it to his heart, beaming from ear to ear.

When he chose his (new positive) word, he began rocking as he held it to his heart, beaming from ear to ear. 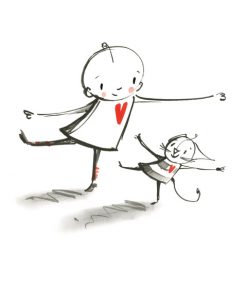 Another little boy, after going through a similar exercise, was waiting after school when Kate left. “He had picked up the word ‘wise’ but didn’t know what it meant. So, we talked about it, googled it, and thought about examples of when he had been wise. I was a bit worried when I saw him after school as he was on his own, so I rolled down my car window to ask if we should go back into school. He jumped up and shouted at the top of his voice, “I AM WISE!’ and then ran home!”

He jumped up and shouted at the top of his voice, “I AM WISE!’ and then ran home!”

Culture of the Heart changing the culture of schools 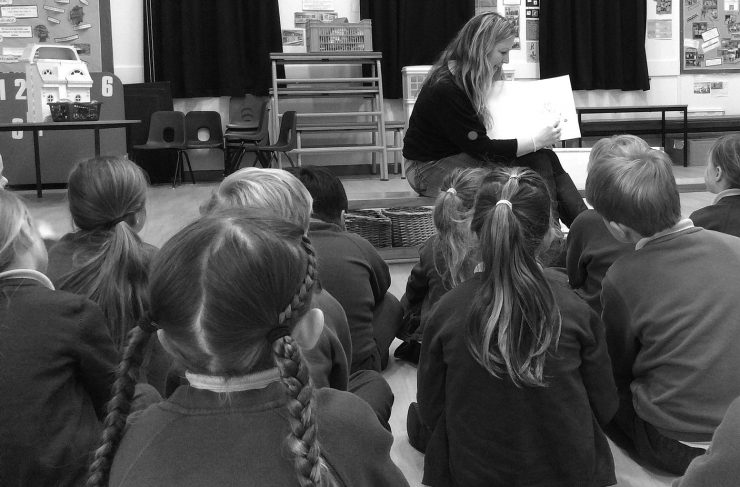 Culture of the Heart school workshop

For all of these children, they were starting to experience the building blocks of self-worth. If we feel uncertain about who we are because of what we have been told about ourselves, how can we form satisfying relationships with others and value them? Affirmation is vital, it starts with words, spreads to actions and builds up friendships, communities and society.

These workshops helped inform an almighty journey of research and study around self-worth, values, mental and emotional health and what creates healthy relationships and therefore healthy communities. Kate listened, explored and sought out professionals who helped to finally produce The Culture of the Heart School Resource pack. She has trialled it over two years across 2000 students of varying primary school age and differing educational environments. The feedback has been amazing. One head teacher  said the ripple effect from the sessions had changed the culture of the school. 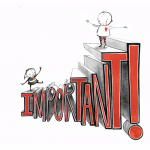 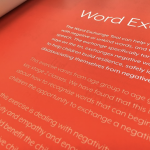 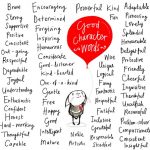 One head teacher said the ripple effect from the sessions had changed the culture of the school.

Another head teacher said that Kate had worked with a year 5 class who, she confessed, were the worst cohort the school had ever had. Their camp was coming up and no teacher wanted to go – they had resorted to drawing straws. After working with Culture of the Heart, the school camp turned out to be the best they had ever had as the children had changed.

“Part of that change comes from developing emotional intelligence,” says Kate. “It isn’t something we are necessarily taught, yet all need. We need to be able to recognise that we have worth and that the feelings we have matter. Emotions are powerful and complex, and for children, even more so. 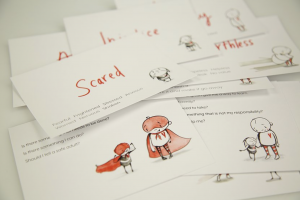 “If we help our children to understand I’m feeling nervous or vulnerable or angry and this makes me feel like this, or that, then that helps to unpack those feelings. No emotion is negative, but it’s really helpful to recognise and understand the feelings, instead of suppressing or trying to shut them down. Learning how to communicate them in a healthy way helps to make connections and begin to build good relationships, not break them. By becoming more self-aware, empathy for others has a chance to develop. For children, this is golden.”

Turning the tide of happiness with Culture of the Heart

For church schools, the Culture of the Heart Resource is scriptural – no one values relationships (or children) more than Christ. For all primary schools, this is essential. We have to start turning the tide of unhappiness. Our children and young people are hurting, and never more so than now during this pandemic. How many more headlines do we have to read, or how many young people have to painfully and tragically demonstrate just how unhappy they are before we start listening and making a cultural change?

To find out more about Culture of the Heart, watch the video below or contact Kate Jane Neal or Katie Fitzsimmons, the Diocesan Head of Education.

Our children are unhappy – what can we do about it?

Diocese of Truro @DioTruro
Our teachers in Cornwall walk a difficult path between dazzling light and painful darkness they don't avoid. An upl… twitter.com/i/web/status/1…
About 22 hours ago
ReplyRetweetFavourite