Wait, pray, love as a school chaplain even during lockdown 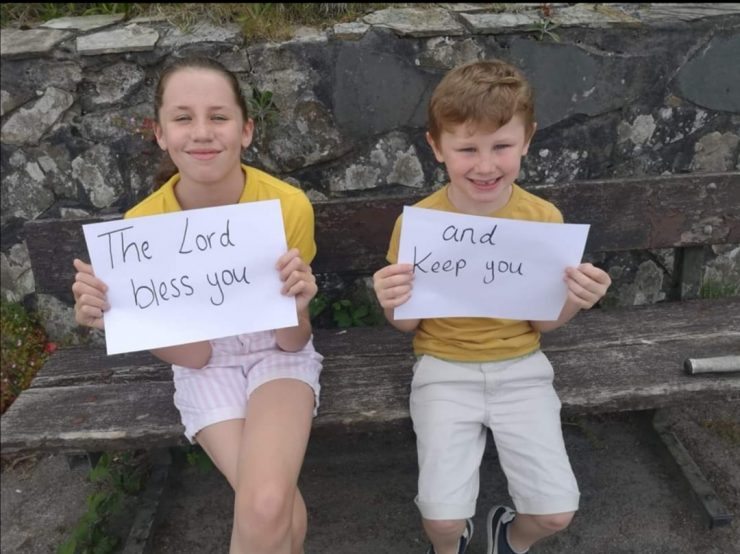 Emma Antoniou is a school chaplain at Bishop Bronescombe C of E School, and would have loved to have leapt into the role but instead spent a good few years waiting, praying, listening, discerning…

“It was Jules’ fault. I was all for just doing something, but Jules insisted we wait and pray. Which we did.” Jules is Revd Jules Williams, Priest-in-charge at St Luke’s, Boscoppa, St Blazey and Luxulyan and also a director for the Celtic Cross Education Trust (of which Bishop Bronescombe is part).

“It was Jules’ fault. I was all for just doing something, but Jules insisted we wait and pray. Which we did.”

Emma came to faith five years ago. It began one Christmas as Jules arrived in the parish and was told no one comes to church, St Luke’s, because church is in the school and who wants to go back to school on Christmas Day? “I had barely prepared!” said Jules. “Then in walks Emma plus three children and her husband and I had to cobble together a message around the Christmas story!” The message hit home and started something in Emma that today sees her leading life-transforming groups for families and one to one mentoring sessions for children.

Grace Outpouring and the value of blessing the community

But only after two years of praying. “I was very impatient, as most new Christians are, but Jules was very clear that we needed to pray, listen and build relationships, which we did.” They read Grace Outpouring and went to Ffald y Brenin which really inspired and encouraged them about the value and importance of blessing their own community. They tried various initiatives with other churches, which, Emma says, was great as a confidence boost to develop leadership skills but didn’t feel right for their setting.

“We just knew God was calling us to be relational…but it was hard to be faithful to that. We didn’t know what that could look like in our school/church setting.”

“We just knew God was calling us to be relational. He created us to be in relationship with Jesus and with each other, but it was hard to be faithful to that. We didn’t know what that could look like in our school/church setting.” So they continued with prayer and took it into the school. They set up a Tuesday lunchtime prayer time, letting the teachers and staff know about it, offering an open door if anyone wanted to join them or request prayer, thinking it would probably just be the two of them.

“It never was! We never got to pray by ourselves because the people kept coming!” says Jules. The pair saw how God provided that opportunity for prayer for key members of staff who had real life-changing events at that time. They were able to pray with them and build up trust, which became the bedrock of everything that followed.

Becoming a school chaplain and showing how kids matter, with Kidsmatter

They organised a full day of sharing the Gospel with the whole school, led by Pulse Ministries. “It was the best thing I’ve ever been involved in,” says Emma. There was an amazing buzz and the children responded wholeheartedly, but a parent complained. “Thankfully, because we have such a great relationship with the school, they had our backs. But it showed us we needed to formalise the relationship, so that everyone knew what our role was, the position of the church and what parents could expect their children would experience in this Church of England school.”

Which is how the role of school chaplain came into being. It was important to set up something that safeguarded the work for the future, if staff changed, for example. It was also good to clarify what the role was, in that they were there to pray for staff, and children, to listen and support, but not counsel.

From there, Emma began to lead Kidsmatter. These are a series of sessions, guided by Emma, with families and their children, referred by the school, to discuss family issues.

“It’s brilliant,” says Emma. “You’re not going to solve any parenting problems in ten weeks, but you are able to bring them into community with each other and with church. So, they know they are loved and not judged, no matter what. I get to walk alongside them, journey with them, and, little by little, see changes in the children and their families.”

How lockdown has brought out the best in parents on Kidsmatter

Kidsmatter has been going for a couple of years now, but it has been during lockdown that Emma has seen the most remarkable transformation. “It’s been phenomenal. We haven’t been able to meet but we have WhatsApp groups. The families have raised themselves up, been real with each other and helped each other through. They don’t ask me anymore what I might think, they’ve just got on and looked after each other. There is no pretence that they have Facebook families (who does?), they are honest with each other and shown me the real fruits of how and why Kidsmatter works.”

There is no pretence that they have Facebook families (who does?), they are honest with each other and shown me the real fruits of how and why Kidsmatter works.

One to one mentoring

Emma has also initiated a one to one mentoring programme. Emma mentors three children each week during school time. The hope is it will help children through particularly challenging times and stop situations from escalating. Parents have to be onboard with the idea and be made aware that the children will be asked what they would like prayer for. Whatever is said in the sessions is completely confidential, but Emma is supervised by an ex-social worker, giving her the space to process and off-load whatever she might have heard.

In both areas of her work as a school chaplain, Emma has the back up of the TIS team working at the school. Bishop Bronescombe is a Trauma Informed School, which means they have trained practitioners to support children, who have been adversely affected by trauma. “They are a great help if ever I’m stuck and don’t know how to move forward.”

It became apparent that there was a big bereavement need at the school, so Emma secured some funding from Funds for Mission and undertook some training with Penhaligon’s Friends, a Cornish charity that supports bereaved families with children and young people.

“It’s been incredibly helpful. It doesn’t just deal with bereavement but the concept of loss. So that could be the loss experienced when a family pet dies, or parents split up, or leaving the family home if fleeing from domestic abuse. It’s been tremendous background knowledge to have.”

It hasn’t been possible to continue with the mentoring sessions during lockdown, as it is impossible to have the security of privacy. But the children haven’t been forgotten. They have been included in the activity parcels that all the families in the Kidsmatter programme have been sent. These have included tarpaulins and bamboo sticks to make dens; paints, paper and brushes and materials to make “I wish my teacher knew” cards. These are cards that parents and children work on together to let teachers know what has happened in their lives or how they are feeling during lockdown.

The pain and pleasure of being an unpaid school chaplain

Many people approach Emma and Jules, asking how they have managed to achieve so much and how they can replicate or upscale all that they are doing in Bishop Bronescombe. “It’s a tricky one,” says Jules. “And a little bit hilarious! We do this with no money, which is incredibly hard. There is no room at the school for the sessions, so we have to pay for premises hire off-site. Emma isn’t paid, despite being highly skilled, highly trained (she was a Paediatric Intensive Care nurse in the NHS and a nurse in the British Army) and, with a family, would most definitely benefit them if she was. We also fundraise for every piece of equipment, training or tool that we use. And yet it works. God provides, every time, and we have decided, for now, to keep relying on that.”

“It’s a tricky one,” says Jules. “And a little bit hilarious! We do this with no money, which is incredibly hard… Emma isn’t paid ( to be a school chaplain) despite being highly skilled, highly trained… And yet it works. God provides, every time, and we have decided, for now, to keep relying on that.”

One of the powerful advantages of being an unpaid school chaplain is no parent at the school can ever say of Emma that she is only doing what she is doing because she’s paid to. Her work is an amazing witness and testimony to the truth that relationships are everything. Relationships with each other, with families, children, the school, church and with God.

A time for prayer

Emma and Jules’ work is also a great example of the power of prayer, and what happens if you really take the time to listen. As a foot note, the praying continues. A relatively new member of St Luke’s has taken to prayer-walking the area, twice a day. “It’s a time for intercessors, they don’t tell people what they are doing, they just quietly get on and pray and it’s changing things,” says Jules. It certainly seems to be in and around Bishop Bronescombe and St Luke’s Church.

“It’s a time for intercessors, they don’t tell people what they are doing, they just quietly get on and pray and it’s changing things.”

Hold them in your prayers as they explore the possibility of securing a premises made from shipping containers on the school site. It’s an exciting story for another article!

Tegan – a teenager in flight for her faith